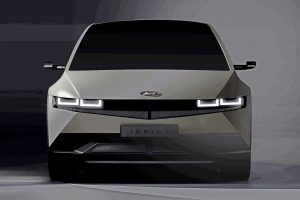 The upcoming Ioniq 5 Volkswagen ID.4 rival will strongly embrace the design themes of the Hyundai 45 Concept 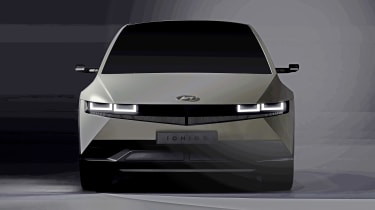 Hyundai has offered up a tantalising glimpse of the all-new Ioniq 5 electric SUV. The car will be the first production model from the Korean marque to use the new E-GMP platform for electric cars and wear the Ioniq badge of the firm’s new fully electric sub-brand.

These new teaser images reveal that the road-going Ioniq 5 will bear a striking resemblance to the Hyundai 45 concept revealed at the 2019 Frankfurt Motor Show. A strong retro-futuristic design language, dubbed ‘high-tech’ by Hyundai, has been developed for the upcoming Volkswagen ID.4 rival.

The car will be revealed in full in February, but we can make out plenty from these official teasers. The front end of the 45 Concept is carried over with distinctive square headlights, while the low nose is part of a huge clamshell style bonnet.

Huge 20-inch wheels have been applied to the finished car, while the rear end is almost completely identical to the 2019 concept vehicle. Changes to the profiles of the front and rear bumpers appear to be the only obvious revisions. 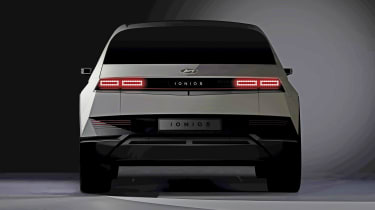 “Beginning with Ioniq 5, our dedicated BEV lineup brand will redefine the relationship between people and their cars, establishing a new standard against which all BEV design experiences will be measured,” said Hyundai design head SangYup Lee.

Most of the car’s specification details remain unannounced, but Hyundai has hinted at the rapid recharging capability. Plug the Ioniq 5 into a fast enough charger, and 62 miles of range can be added in five minutes.

Like Kia’s new all-electric coupe-SUV (and indeed all upcoming Ioniq models) the production version of the Ioniq 5 will be based on the Hyundai Group’s scaleable E-GMP underpinnings, which will function in a similar fashion to the Volkswagen Group’s MEB platform.

When it enters production, E-GMP will be one of the most advanced electric car platforms on the market, featuring over-the-air updates and the same 800-volt charging technology as the Porsche Taycan. The latter feature will also give buyers access to IONITY’s 350kW fast-charging network. 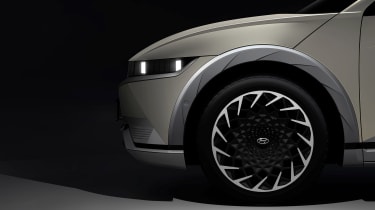 Performance details are yet to be confirmed, but the Hyundai Group has previously said that Kia’s comparably sized electric SUV will have a range of around 300 miles, as well as sub-20-minute recharge times.

At the 2019 Frankfurt Motor Show, SangYup Lee, Hyundai’s Senior Vice President and head of design, walked us through the 45 concept’s interior styling. He mentioned how the 1974 Pony Coupe inspired details such as the digital instrument binnacle, upholstery and badging, stating:

“Today’s digital hi-tech approach can alienate some people, so we wanted to add in some warmth – a bit of an analogue feeling to make it more approachable. Even the logos on the car and the light patterns give a touch of the 70s, and inside we wanted to produce a living room concept.”

The 45 concept’s interior also sported a range of yesteryear design themes and materials, with recycled wool floor mats, a wooden dashboard, heavy cotton upholstery and louvres for the panoramic glass roof. These were blended with modern technology, such as hidden ambient lighting and back-lit touch sensitive pads for some of the controls.

Whether or not these features will make it onto the production model remains to be seen – the early test mules our spy photographers captured undergoing mechanical stress-testing, had their production interiors swapped for bucket seats and a roll cage. However, peering through the glass, we could make out a broad digital gauge cluster, which should appear on the finished product.

What do you make of the Ioniq 5 SUV? Let us know in the comments section below…