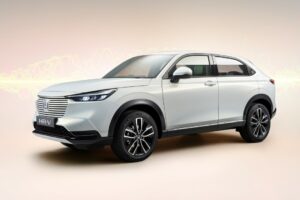 There are three versions of the new hybrid Honda HR-V SUV coming to the UK, with prices starting from £26,960

UK prices for the new all-hybrid Honda HR-V SUV have been revealed. The Japanese firm’s latest Nissan Juke rival is on sale now, priced from £26,960, while monthly finance plans start from £269.

The range kicks off with Elegance trim, which features LED headlights, heated front seats, 18-inch alloys and a nine-inch touchscreen with smartphone connectivity.

Advance trim starts from £29,210 and adds a heated steering wheel and a power tailgate alongside a cabin partially trimmed in synthetic leather. Range-topping Advance Style is priced from £31,660 and comes with unique design elements, such as two-tone paint and orange interior detailing, plus a premium stereo. All versions come with Honda Sensing safety and driver assistance features.

The new HR-V’s powertrain uses the same Atkinson cycle 1.5-litre petrol engine with two electric motors, and a battery mounted under the boot floor. The battery pack has 60 cells, compared with 48 in the Jazz, to account for the HR-V’s added mass. The system also has a slightly higher combined output of 129bhp and 253Nm of torque, to offset the car’s added bulk. This propels the HR-V from 0-62mph in 10.6 seconds.

Like the Honda Jazz, the HR-V’s petrol engine works primarily as a generator for the electric motor system. However, the HR-V will actively switch between three modes – Electric Drive, Hybrid Drive and Engine Drive – depending on powertrain loads, to maximise efficiency.

There are also three drive modes to choose from, with Sport providing a sharper throttle response and Econ tweaking the air-conditioning and throttle for increased efficiency. Normal mode provides a middle-ground between the two.

The level of energy regeneration when braking or coasting can also be adjusted by using paddles behind the steering wheel. On the WLTP cycle, the hybrid system allows the HR-V to achieve 52.3mpg, and CO2 emissions of 122 g/km.

Honda says that the HR-V’s hybrid set-up “achieves a higher ratio of accumulated electric drive time when driving in cities than other hybrids on sale today”, but the firm hasn’t actually confirmed a maximum electric-only range figure. However, Kojiro Okabe, one of the head engineers for the new HR-V project told us that EV running isn’t a priority:

“We haven’t very much focused on how long you can drive purely electric in one go. It’s more about the total balance of how efficiently you can produce the electric power.

“In city driving, most of the time you can drive in pure-electric mode. However, we haven’t actually determined and measured, and also focussed our development in terms of maximising the pure-electric range in one go.”

The Honda HR-V has always offered a more coupe-like look compared with its competitors, something this third-generation model has advanced even further, borrowing some light design inspiration from last year’s Honda e:Concept prototype.

Like the concept, it features a broad radiator grille and a rakish profile, with a roofline that’s 20mm lower than the old car’s. Honda has also increased the HR-V’s ride height by 10mm and fitted larger 18-inch alloy wheels as standard, adding to its bold new stance. The rest of the car has clean and simple surfacing.

Honda says the cosmetic changes aren’t just for the sake of design, though. There’s an air curtain along the lower edge of the bumper, as well as a subtle lip for the rear edge of the side skirts, both of which help to improve the car’s aerodynamics. The new spoiler also helps to clean up the turbulent air in the HR-V’s wake, reducing drag and improving fuel economy.

Inside, Honda has adopted the same minimalist design language as the Honda e EV. The dashboard is clutter free, comprising only a seven-inch instrument cluster, a nine-inch infotainment system and some simple rotary climate control knobs above the centre console.

Honda has fitted its new Air Diffusion System in place of traditional air vents mounted in the centre of the cabin. It uses two L-shaped outlets by the A-pillars, which direct air down the inside of the crossover’s windows.

Despite being the same length overall as the old HR-V, Honda says it has improved the new car’s interior space, thanks in part to the new drivetrain. In the rear, there’s an extra 35mm of legroom and the rear seats recline by a further two degrees compared with its predecessor.

Honda has also managed to retain the old car’s versatile Magic Seats, which allows users to either fold the rear seat backs flat, or keep them in place and flip the seat bases up (like a cinema chair) for extra practicality. Honda says the system allows the HR-V to easily carry two adult mountain bikes with the front wheels removed.

The new camera can better detect pedestrians during night-time driving, while the improved software can now recognise oncoming vehicles which stray into the path of the HR-V, including cyclists and motorcycles, and automatically apply the brakes.

There’s a new adaptive cruise control system, too, with new software that Honda says can better perform overtakes. The vehicle can now calculate the smoothest steering angle and acceleration mapping required for the overtake. It also accelerates earlier, to make sure there’s an adequate amount of speed for the manoeuvre.

The new HR-V will also be offered with Hill Descent Control for the first time in Europe, which can operate from speeds as low as 3km/h (1.86mph). Honda says the system can assist drivers in a range of conditions, from “navigating slippery outdoor car park ramps to tackling steep snowy roads.”

What are the best hybrid cars on sale right now? Click here to read our top 10…