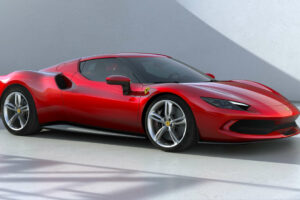 This is the new Ferrari 296 GTB, the Italian brand’s entry-level supercar to sit below the F8 Tributo and a rival to the recently unveiled plug-in hybrid McLaren Artura.

The 296 GTB is also the first six-cylinder road car from Ferrari since the Dino 246 GT was launched back in 1974 – and it's bristling with technology designed to deliver stunning performance with as small an environmental impact as possible.

Ferrari hasn’t yet confirmed a UK-specific price for the 296 GTB. In mainland Europe, prices will start from €269,000 which translates to around £230,000 under the current exchange rate. Left-hand drive models will reach buyers in Spring 2022, with UK cars expected later in the year.

We’ll start with the powertrain. It’s a plug-in hybrid system based around a twin-turbocharged 2.9-litre V6, which produces a total of 819bhp and 740Nm of torque. Ferrari says that’s enough for a 0-62mph time of 2.9 seconds and a top speed of more than 205mph.

The V6 is a clean-sheet design, too. It has a 120-degree V-angle, which helps allow for the “hot-vee” turbocharger configuration, with the compressors mounted in the valley created by the V6’s two cylinder banks. Ferrari says this improves performance, while also lowering the supercar’s centre of gravity, which benefits handling.

As an aside, Ferrari also boasts that its new V6 unit has the highest specific output of any production engine currently on sale. Without electrical assistance, the unit produces 654bhp, which translates to 218bhp per litre of displacement.

For comparison, the previous record holder was the Mercedes-AMG A 45 S hot hatchback, which mustered 208bhp per litre from its turbocharged 2.0-litre four-cylinder engine.

What’s more, unlike most outrageously powerful hybrid supercars, (such as the Porsche 918 Spyder and the Ferrari SF90 Stradale), the 296 GTB is rear-wheel drive only. It only has one electric motor, which is sandwiched between the engine and an eight-speed automatic gearbox.

In an effort to make the car as nimble as possible, Ferrari has also fitted a relatively small 7.45kWh battery pack, which offers a maximum pure-electric range of 25km (around 15 miles).

To control the engine’s immense power, the 296 GTB’s chassis is bursting with technology, such as fly-by-wire brakes and magnetically controlled adaptive dampers. Ferrari has also slashed the car’s wheelbase by 50mm compared with previous mid-engined berlinettas, which it says has improved its cornering ability, made possible partly by the shorter engine.

In fact, the new V6 engine should have a big impact on the 296 GTB’s handling, as it’s 30kg lighter than Ferrari’s old 3.9-litre V8 unit. The whole car weighs just 1,470kg, and even though that’s 75kg more than the McLaren Artura (which uses a carbon fibre chassis), the 296 GTB’s 148bhp power advantage should more than make up the difference.

There’s also a new six-way chassis dynamic sensor and the latest traction control software, which is fitted with the most recent version of Ferrari’s Side Slip Control system. The software takes inputs from the chassis sensors and can estimate the amount of grip at the rear tyres to provide just enough assistance to keep the car in a controlled slide.

For a more focussed experience, Ferrari also offers an optional Assetto Fiorano package which bumps up the price-tag to €302,000 (roughly £260,000) and adds extra carbon fibre trim, harder GT racing-derived shock absorbers and some redesigned panels, which result in a 12kg weight reduction.

Buyers can also specify a couple of optional extras with the Assetto Fiorano package, including a livery inspired by the classic Ferrari 250 Le Mans, Michelin Pilot Sport Cup 2 R tyres and a lightweight Lexan rear screen, which hacks an extra 3kg off the car’s kerbweight.

Lurking beneath the 296 GTB’s panels is a network of air channels and ducts, including Ferrari’s “tea-tray” splitter, which pushes air under the car’s nose towards the GTB’s aggressive rear diffuser.

There’s also an active rear spoiler which pops out of the rear deck and provides 100kg of downforce on its own. In total, Ferrari says the 296 GTB can generate 360kg of downforce at 155mph when equipped with the Assetto Fiorano package.

The 296 GTB’s cabin is an evolution of the concept introduced with the SF90 Stradale. The two cars share the same level of technology, but Ferrari says its designers aimed to give the GTB’s interior a more sophisticated, minimalist appearance.

As a result, the centre console shares the same modern interpretation of the classic H-gate shifter found on the SF90, although the dashboard has few creases and vents. However, Ferrari has retained the same driver-focussed lighting and climate controls panels on either side of the instrument cluster.

The steering wheel features all the usual Ferrari trinketry, such as the trademark manettino drive mode selector, paddle shifters and buttons for the indicators. The passenger-side dashboard also gets an extra display, which shows information including engine revs, speed and the current gear.

In the next four years, the Ferrari 296 GTB will be joined by the company’s first EV and the Purosangue SUV. All three cars will be key pillars of the Italian brand’s electrification strategy – and it’s possible that the Purosangue could use the same hybrid V6 engine as the 296.

What does the new Ferrari 296 GTB have to beat? Check out our top 10 list of the best supercars on sale by clicking here…