Volkswagen’s first dedicated electric vehicle will go on sale this summer, with a range of up to 342 miles and a base-price of around £23,000

Volkswagen’s first dedicated electric vehicle, the ID.3, will go on sale in summer this year. In Germany, prices will start from €30,000, which translates to around £23,000 in the UK once the Government’s £3,500 plug-in car grant has been applied. Volkswagen says the car will be around £800 cheaper than an an equivalently specced petrol or diesel Golf.

Volkswagen’s most recent electric vehicles, (the e-Golf and the e-Up!), are both based on combustion-engined platforms. However, the ID.3 marks the debut of the brand’s all-new MEB platform – a bespoke pure-electric platform that will soon underpin dozens of electric vehicles from Volkswagen, SEAT, Skoda and Audi.

The ID.3 will be launched in a single, limited-run “1st Edition” specification. Each example will feature a rear-mounted 201bhp electric motor and 58kWh battery pack, which Volkswagen says will provide a range of between 186 and 261 miles.

Global production of the ID.3 “1st Edition” will be limited to just 30,000 units – and all of them have already been reserved, including those allocated for the UK market. British buyers should expect to get their vehicles this summer, around the same time that the rest of the ID.3 range goes on sale. 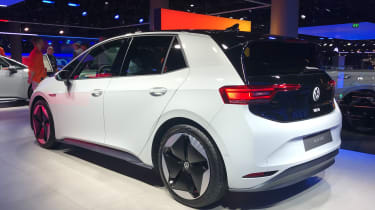 The standard-issue, entry-level ID.3 will feature a less powerful 148bhp electric motor and a smaller capacity 45kWh battery, for a range of between 143 and 205 miles. Volkswagen’s 201bhp electric motor will also be offered with a 77kWh battery in higher-specced models, allowing the ID.3 to cover between 242 and 342 miles before recharging.

Mid- and higher-spec ID.3s will offer support for 100kW fast charging as standard, which will allow around 180 miles of range to be added in half an hour. However, the uprated charging system will be offered as an optional extra on the entry-level model, in a bid to keep down the sticker-price. As such, it’ll stick with a 50kW charger.

Late last year, Volkswagen also confirmed it was “actively considering” a high-performance version of the ID.3. It’ll feature the same MEB platform as the standard car, but it’ll come with a more potent electric drivetrain and an uprated battery pack, designed using the expertise gained from the ID.R racer project.

Regardless of output, Volkswagen guarantees that the ID.3's batteries will retain at least 70 percent of their usable capacity for eight years or 160,000km (around 100,000 miles). Frank Blome, Head of Volkswagen's Centre of Excellence in Salzgitter said: “Our goal is to make sure the batteries last as long as the cars.

From the outside, the ID.3 sticks close to the concept that made its debut at the Paris Motor Show back in 2016. The cute headlights remain, along with the ‘honeycomb’ motif along the front bumper and the black tailgate is also still present; this final element is destined to be an ever-present design cue on ID.3s.

The most noticeable change comes in the side profile, where Volkswagen has had to fit a longer bonnet to comply with pedestrian safety regulations. However, the company’s design team, led by Klaus Bischoff, has added a black plastic panel under the windscreen to trick your eye into believing the bonnet is shorter than it actually is.

So, from a head-on view at least, the ID.3 really does look like its concept. We’re also told that, while  the car’s Matrix LED headlamps aren’t able to perform the “winking” trick of the show car, they will still “flutter their eyelids” at the owner as they approach the vehicle

The car is 4,261mm long and 1,809mm wide – so just 23mm longer and 20mm wider than the new Mk8 Golf – but the ID.3’s wheelbase is a full 145mm longer than the regular family hatchback’s, at 2,765mm. The new arrival’s roofline does sit around 60mm higher than the Golf’s, however – a clue that the battery installation has resulted in a slightly thicker floor.

Volkswagen hasn’t released performance data for the ID.3 yet, other than the car’s top speed figure of 100mph. The rear-drive layout also helps to give the car a tight turning circle for a car of its size – at 10.2 metres, it’s much closer to the figure of the Up! city car than the Golf’s

The differences from the concept are more pronounced inside, where the ID.3 drops the show car’s retractable steering wheel and features a more mainstream choice of materials and finishes. The design is clean and uncluttered, though, and information is displayed on a digital ‘pod’ instrument panel. The gear selector is a rocker switch mounted on the side of this – a layout that will be familiar to anyone who’s driven a BMW i3. 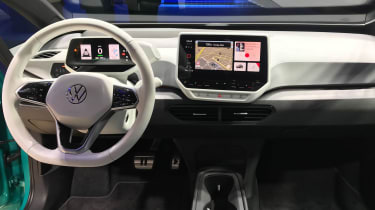 A 10-inch central screen is standard across the range, and it features VW’s latest ‘touch-sensitive bar’, on which you swipe across various zones to control the cabin temperature as well as the volume of the infotainment. Volkswagen’s “intelligent natural voice control” system will also feature, as will smartphone connectivity.

Volkswagen’s design team has used the extra floor space to create plenty of cubbyholes and a central storage bin between the front seats. But, the smartest trick in the cabin is delivered by that long wheelbase, because knee- and leg-room in the rear looks on par with a Passat, rather than a Golf. There’s no great compromise on boot space, either. At 385 litres, the ID.3’s capacity isn’t at the peak of the family car class, but it’s more than acceptable.

Specs on the wider ID.3 range have yet to be confirmed, but UK 1st Edition cars will get 19-inch alloy wheels, along with a rear-view camera, a heated steering wheel and front seats, a pair of USB-C connectors for rear-seat passengers, adaptive cruise control and satellite navigation 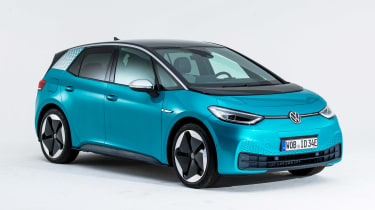 The ID.3 will be the first model assembled at Volkswagen’s recently repurposed, €1.2 billion Zwickau production facility. By 2020, Volkswagen claims the plant will be the largest, most productive all-electric car plant in Europe, with a prospective production capacity of 330,000 MEB-based vehicles per year.

In preparation for MEB production, Volkswagen’s Zwickau plant is currently undergoing a transformation, being converted from an internal-combustion engined production facility to a pure-electric one. Volkswagen has outfitted the plant with a modernised body shop and updated assembly lines, with strong conveyor systems to handle the extra weight of the EVs. 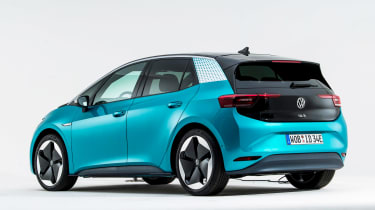 Volkswagen says the plant will produce vehicles in a carbon-neutral manner, relying entirely on eco-conscious hydropower plants instead of fossil-fuel power plants. The plant will also be highly automated, with a total of 1,700 production robots handling everything from body assembly to dashboard installation.

A fleet of 500 driverless transport systems will also be used to autonomously deliver parts across the Zwickau plant’s production lines. At the assembly line’s end, Volkswagen’s fully networked ID.3 will automatically perform a quality check of its own electronic systems.

Are you excited to see the all-electric Volkswagen ID.3 on UK roads? Let us know in the comments section below…