Three versions of the new hot Skoda Octavia vRS are on the way, but plug-in hybrid power makes its debut first 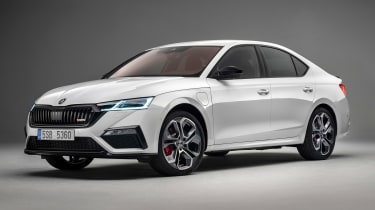 The latest Volkswagen Golf GTI isn’t the only new hot hatchback from the Volkswagen Group. Skoda has revealed the new fourth-generation Octavia vRS, which features a plug-in hybrid powertrain for the very first time.

Available as both hatchback and estate, the new car is called the vRS iV and is powered by a 1.4-litre four-cylinder engine and a 113bhp electric motor. It’s the same powertrain as the new Golf GTE, with 242bhp and 400Nm, while CO2 emissions could be as low as 30g/km under WLTP rules.

As well as that CO2 figure, Skoda claims that this hot Octavia is capable of 0-62mph in 7.3 seconds and a top speed of 139mph. And that’s all while being able to cover 37 miles on electric power only – just as long as you can keep the car’s 13kWh battery pack fully topped up. Power is sent to the front axle only, via a six-speed DSG gearbox that can be controlled using paddle-shifters found behind the steering wheel. 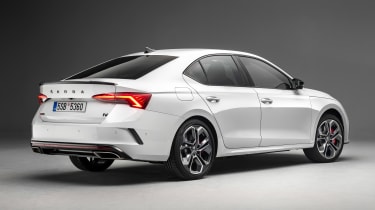 Skoda has also confirmed that the sports suspension on the new vRS is set 15mm lower than the standard car’s, and that the steering gets a unique profile.

This is not the only vRS variant of the new Octavia planned, either; both petrol and diesel versions are scheduled too, but these will be revealed at a later date. It means that the Octavia vRS range will mirror that of the Golf ‘GT’ line-up, with the diesel version likely to be a 197bhp 2.0-litre TDI, and the pure-petrol Octavia vRS set to use the 2.0-litre TSI unit of the Golf GTI, with up to 242bhp possible.

Elsewhere, the latest Octavia vRS gets a sporty visual transformation. It has a bodykit with new, aggressive cuts, and air vents with gloss-black surrounds, a new front bumper, rear diffuser and roof spoiler, while wheels of up to 19 inches can be specified. Gloss-black 18in wheels come as standard, along with full LED-matrix headlights and LED tail-lights. 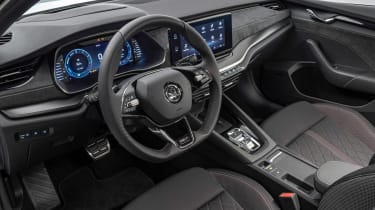 In the cabin, the Octavia vRS can be optionally fitted with Alcantara-trimmed sports seats, while the dashboard and headlining are also lined in the same material, and two 10-inch screens – one behind the steering wheel and a central touchscreen display – take care of both the instrumentation and the infotainment. The steering wheel is a three-spoke piece, compared with the two-spoke wheel on the normal Octavia, and aluminium pedals complete the sports makeover.

The new Octavia vRS will be launched in the UK this autumn. Prices for the plug-in iV version are likely to start from £32,000, and it will be positioned as the most expensive version of the new Octavia vRS trio. UK specifications and standard equipment levels have not yet been finalised, however.

Do you like look of the new Skoda Octavia vRS iV? Let us know your thoughts below…