An updated version of the Jaguar F-Pace SVR has been caught on camera, undergoing testing on its German rivals’ home turf 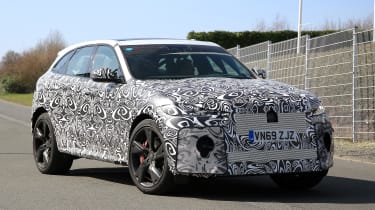 The Jaguar F-Pace SVR only went on sale in the UK mid-way through last year, but it seems the British brand is already working on a facelifted version. The standard-issue SUV, which was launched in 2017, will be ready for its mid-cycle refresh towards the end of this year, and Jaguar will launch an updated range-topping SVR version at the same time.

These latest spy shots reveal that Jaguar engineers are ramping up the development cycle by putting the new F-Pace SVR through thorough dynamic assessment at the Nurburgring circuit in Germany.

Cosmetic revisions for the Jaguar F-Pace SVR will be fairly minimal. This development mule shares the same bodywork as the outgoing model, with only a subtle tweak to the front bumper vents, a pair of redesigned LED headlamps, a set of new tail-lights and the same, larger radiator grille fitted to the recently facelifted Jaguar XE.

The most noticeable difference over the old model is a chunky new bonnet, with a power bulge over the engine. Jaguar’s trademark SVR styling features, such as the quad-exit exhausts, lowered ride height and enormous alloy wheels will also persist across the update.

The biggest changes are likely to occur on the inside. Recently, Jaguar has been methodically updating the interior of each of its models, binning its dated touchscreens and gauge clusters in favour of a new 10.2-inch infotainment system and 12.3-inch digital instrument panel, lifted from the I-Pace. The F-Pace is expected to follow suit.

Like the old model, the facelifted Jaguar F-Pace SVR will be powered by a supercharged 5.0-litre V8 engine. Power and torque figures are unlikely to change over the outgoing version, standing at 542bhp and 680Nm of torque respectively – enough for a 0–62mph time of 4.1 seconds and a top speed of 176mph.

What do you make of the facelifted Jaguar F-Pace SVR? Let us know in the comments section below…