‘Never use E10’: New petrol causing some cars to ‘misfire’ as drivers search for E5 fuel 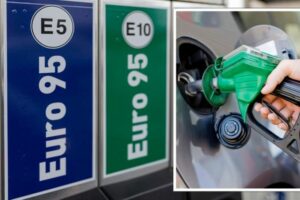 E10 petrol was launched onto forecourts in September with many drivers reporting problems with the fuel and how it is affecting their car. The Government introduced the fuel as a “greener” form of petrol to aid the progression towards reaching net-zero emissions by 2050.

Despite this, many motorists have complained about the fuel saying that the increased volume of ethanol is leading to efficiency problems.

One driver on Twitter said: “I have noticed a significant drop in mileage with this new fuel.

“It runs on E10, but the mileage drop is clear.

“I’ll buy E5 if I can get it, but few garages around here have it.

“Certainly the supermarket petrol stations are all E10.”

Speaking in agreement, Express.co.uk reader eborman said: “No choice as there is no E5 in 4 garages I called at.”

When E10 was launched, the Government stated that E5 would still be available at most petrol stations.

E5 (97+ octane petrol with no more than five percent renewable ethanol), however, will remain available at filling stations that sell two grades of petrol.

Some rural, remote or very small filling stations may sell only either E5 or E10 petrol as standard.