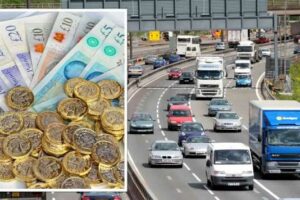 The new report from the Social Market Foundation found that the loss of revenue from fuel duty will lead to an annual £30billion black hole as electric cars become more popular. There are fears this will lead to a massive growth in traffic in England in Wales by 2050, with some estimates showing congestion could worsen by between 17 and 51 percent.

In 2021 and 2022, fuel duty brought in £25.9billion for the treasury, although this money will dry up eventually as the UK switches to electric cars.

The report called fuel duty “regressive” and will become a burden on lower-income households, despite driving the fewest miles.

Scott Corfe, research director at the Social Market Foundation, spoke to GB News about how road pricing in the UK could work as the main form of taxation.

He said: “As we shift towards electric vehicles, we need a new form of motoring taxation.

“Fuel duty raises billions of pounds per year. Fuel duty combined with road tax raises over £30billion a year for the exchequer.

“Electric vehicles are not currently subject to road tax and because they don;t use petrol or diesel, they’re not subject to fuel duty either.

“The Government needs to find the money from somewhere else.

“Frankly it is unfair to impose a tax burden on those who don’t drive, motorists should bear the costs of the congestion they’re creating. And road pricing is the natural solution in the world of electric vehicles.

“Having a per mile charge that motorists pay, that could be something like seven pence per mile driven.”

This would work by motorists taking their car for their yearly MOT where their mileage would be registered and they pay a bill.

Going forward, new technology could be used including telematic boxes inside cars or using a mobile app.

Other variable factors could be used including the time of days when driving or in which areas of the country.

The new report found there was strong public opposition to having a physical box in their car, prompting the Social Marketing Foundation to call for a “simple” scheme of road pricing.

Mr Corfe continued, saying: “What we’re really keen to emphasise in our report is that the current fuel duty regime is unfair.

“People on lower incomes pay proportionately more motoring tax as a share of their income than richer households do.

“What we want is any replacement form of motoring taxation should be fairer than this.

“What we propose is the idea of a free mileage allowance. We know from our data that lower income drivers tend to drive less.

“This means they would pay less tax on average and make motoring taxation more progressive and fairer.

“What we’re proposing is a simple nationwide road pricing regime, but there will be parts of the UK where congestion is particularly problematic and there will need to be complementary schemes in place.

“Unfortunately the London Congestion Charge would need to remain in place.”

By 2030, the sale of new petrol and diesel vehicles will be banned, with a similar ban affecting hybrid vehicles coming five years later.