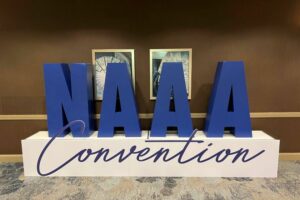 The National Auto Auction Association logo was front and center during the trade group's annual conference at the Sheraton Dallas, Sept. 6-8.

After the disappointment of a canceled event in Chicago last September due to COVID, the National Auto Auction Association made good with an active and engaged confernece Sept. 6-8 in Dallas that drew a long roster of auction industry leaders and professionals eager to reunite in person.

During the event, the NAAA honored or recognized a gallery of notable industry figures for various accomplishments. Here is a roundup of honorees:

Garrison Hudkins has been installed as president of the National Auto Auction Association (NAAA) for the 2022-2023 term. Hudkins became president during a passing of the gavel ceremony from outgoing NAAA President R. Charles Nichols. Hudkins is President of Southern Auto Auction, Eastern Powersports Auction, and SAFS, Inc. NAAA news release

Michael Adcock Gets NAAA Auctioneer of the Year Award

Named in honor of Bernie Hart, who served as NAAA’s executive director for more than 30 years before retiring in 1988, the annual award recognizes the auctioneering industry’s most visible person. NAAA news release

The EVP and general manager of asset remarketing at Element is an innovate remarketing leader, and he has held multiple positions within the fleet services and consumer finance vehicle remarketing divisions during his 35-year career at GE and now Element. NAAA news release

NAAA’s Industry Pioneer Award, given to those who have worked in the wholesale motor vehicle industry, recognizes individuals who have innovated or enhanced methods of improving services to remarketers through NAAA member auctions, have championed NAAA member auctions as providing services for motor vehicle remarketers unavailable from any other source, and have consistently followed the standards of the NAAA Code of Ethics. NAAA news release