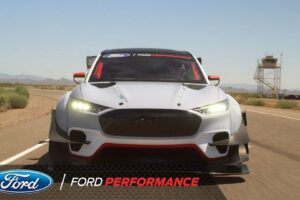 It would be amazing to see these two potent electric beasts face off. Which would win?

The Tesla Model S Plaid may have its first official challenge, but we’ll have to wait and see if it actually pans out. Since it was acknowledged publically by Ford CEO Jim Farley, you’d think there will be follow-through, but who knows. Tesla will also have to agree to a matchup.

The Plaid rival will be the Ford Mustang Mach-E 1400, which isn’t a production car, and it’s not for sale, but it is a beast much like the Model S Plaid. In what some may call “Musk fashion,” Farley has been touting the all-electric beast via his Twitter account.

It comes as no surprise that many eyes are always watching Elon Musk’s Twitter account. And, now that Ford has stepped up its EV game in a big way, and Farley and Ford’s North America Product Communications director Mike Levine have been tweeting often, people are paying close attention.

In a reply to the above tweet from Farley, a Twitter user with the name Mikey Likes Plaid (do you think he’s a Tesla fan?) asked Farley, “Are you gonna drag Plaid for bragging rights?” Interestingly, Farley responded, “Good idea.”

If you’ve watched the interaction on Twitter related to Farley’s posts, he doesn’t typically engage when a Tesla fan starts commenting, especially if the person or people are throwing shade. That’s not typically the case with Mike Levine, but that’s a different story for a different day. Mikey Likes Plaid simply asked a question, and he wasn’t a huge jerk like many Tesla fans going at Farley and Levine on Twitter. It goes both ways, but it’s nice to see that Farley replied.

At any rate, it seems a drag race between the two quickest and most powerful EVs of our time would be an amazing sight to see. The Mach-E 1400 cranks out 1400 horsepower via a whopping seven electric motors. It has a large wing that Teslarati says produces over 2,300 pounds of downforce at 160 mph.

While the Model S Plaid is not specifically a track-ready monster, it’s the quickest production car to date, with the ability to accelerate to 60 mph in under 2 seconds. It just recently set an impressive quarter-mile record of 9.247 seconds, though Tesla says it can do it in 9.23 seconds.

The Mach-E 1400 has pulled off a 10.78-second quarter mile, so it’s not even close. However, since it’s a one-off project, Ford could really do whatever it wanted to make the car produce at an even higher level.

We’ll have to wait and see if Elon Musk is willing to accept this challenge. There would clearly have to be some ground rules. If the Mach-E 1400 were to win, it would give Farley and Levine bragging rights, but the Tesla fans will just point out that this isn’t a production car, but rather, a purpose-built race car prototype