The ongoing legal dispute between Elon Musk and the Securities and Exchange Commission (SEC) continues to take interesting twists.

In the latest development of the legal battle that dates back to 2018 when the SEC imposed a consent decree on Musk’s tweets, the billionaire has likened himself to Eminem and the SEC to the FCC (Federal Communications Commission).

In a filing in a federal court in Manhattan, Musk’s lawyers included a reference to Eminem’s 2002 song “Without Me.”

The song’s original lyrics had FCC instead of SEC, as Eminem at the time had attacked the FCC’s decision to fine radio stations that were playing his hit song “The Real Slim Shady” on the grounds that it had offensive content. 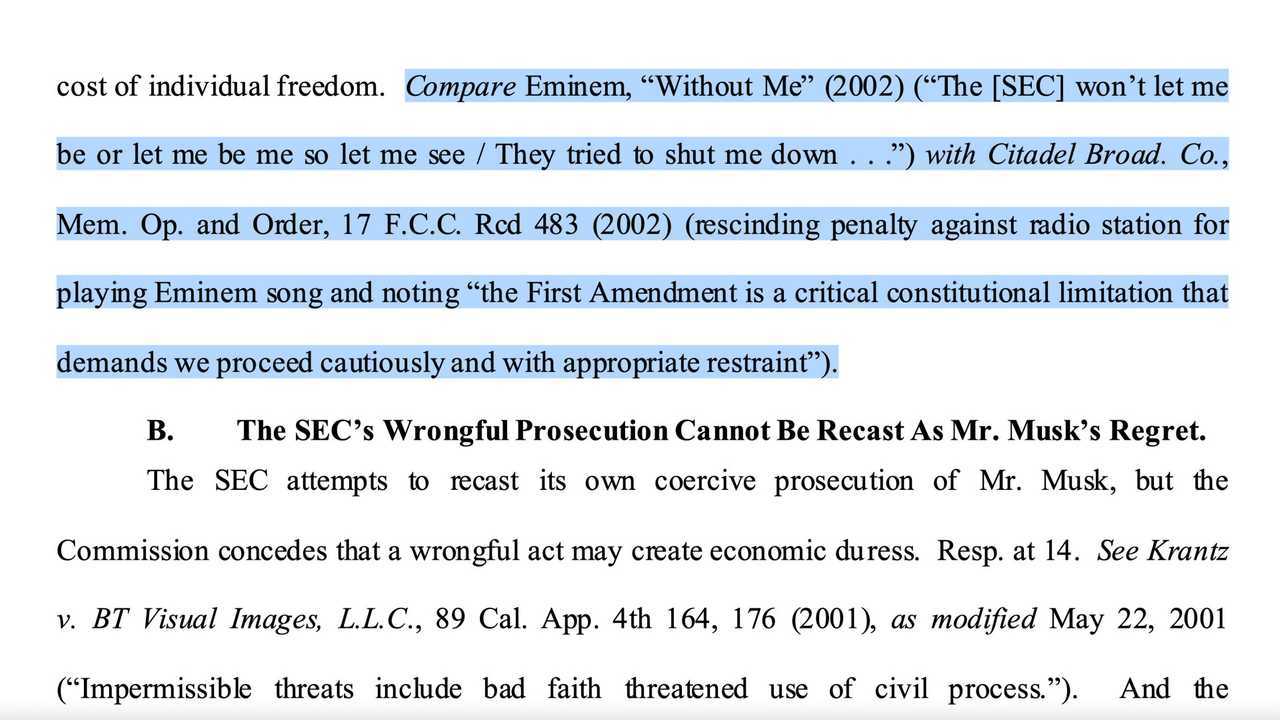 Citadel Broadcasting Company attacked the FCC’s decision and had a penalty against one of its radio stations rescinded; the said station had played a radio edit version of Eminem’s song. The ruling in that case noted that “the First Amendment is a critical constitutional limitation that demands we proceed cautiously and with appropriate restraint.“

Musk is seeking a similar ruling in his legal battle with the SEC, invoking the First Amendment as a reason to throw out the 2018 SEC subpoena that requires him to to obtain pre-approval for his tweets that are of material importance to Tesla.

Musk says the SEC is relentlessly trying to limit his freedom of speech by imposing a “Twitter sitter” to make sure he’s not tweeting information that could be considered material, impacting the company’s stock.

In the filing, Musk’s lawyer claims the SEC issued its subpoena in bad faith and should not pursue a “fishing expedition” to harass Tesla’s CEO.

The feud between the billionaire entrepreneur and the SEC started in 2018 after Musk’s famous “funding secured” tweet on potentially taking Tesla private. Musk maintains that the tweet was truthful, although later reports suggested that funding may have never been secured.

More recently, another tweet caught the SEC’s attention. The commission is investigating Musk’s November 6, 2021, tweet asking his followers whether he should sell 10% of his Tesla stake to cover tax bills on stock options. He has since sold about $16.4 billion of his shares in the EV company.

The SEC did not comment on Musk’s latest appeal. Meanwhile, the Tesla CEO joked on Twitter about “being basically identical” with Eminem. Needless to say, his tweet attracted a barrage of memes.