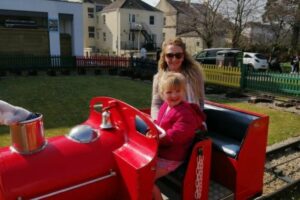 Ms Parker was on her way to taking her daughter to hospital when three-year-old Bobbi suffered the seizure after presenting with blue lips and breathing problems.

She pulled over to the side of the road as advised to do so by a 999 call handler.

An ambulance was then called and took the little girl to hospital.

But while Bobbi was being examined, a paramedic had moved her car blocking the roadside into a nearby car park.

The car park was at a local GP surgery where automatic cameras are installed to stop anyone parking who isn’t seeing a doctor.

Her daughter thankfully made a full recovery, however her mother is furious at having to pay the fine.

Ms Parker has spoken to the manager of Knowle House Surgery who have reassured her they will do what they can to ensure the fine gets abolished.

However, she is still waiting to hear anything further from Smart Parking and has now reached out to the parking ombudsman, reported Plymouth Live.

Ms Parker said: “My main gripe is the fact that the parking company either didn’t read my appeal which is wrong, or they read it and thought I still deserved the fine.

“I have nothing against the doctors, they’ve been great in the way they picked it up and tried to help me out.”

She said that she had spoken to other people who have appealed on similar grounds where situations were out of their control.

She added: “It looks like the company just don’t even read them and just say no, declined”.

Speaking of her daughter’s illness, Ms Parker added: “On top of that, I just didn’t expect to have to deal with this too. It’s not been great.”

A letter to the woman from Smart Parking read: “Having considered your appeal in detail we have decided to uphold the Parking Charge Notice (PCN) as we believe that it was correctly issued in accordance with the terms and conditions advertised within the area concerned.

“We note the comments made in your appeal, however we cannot rescind the PCN on this basis.

“Please be advised that when using the car park in question you must adhere to the advertised Terms and Conditions and it is the responsibility of the driver to ensure they acknowledge the signage upon entering the site.”

It comes as motorists are being hit by record parking fines after nearly two thirds of councils across the UK introduced new restrictions.

Almost two thirds of councils increased the number of roads that had parking restrictions in place, mostly on town centre, residential and suburban roads.