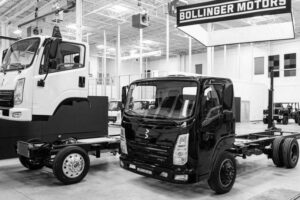 Bollinger impressed a lot of people when it unveiled its B1 and B2 electric vehicles, an SUV and a pickup designed with going off-road in mind. However, after the strong initial impression and amassing of some 50,000 reservations combined for both models, Bollinger looked like it was struggling to get them to market, and in January of this year it announced that it was shifting focus to a commercial vehicle EV platform and that it would refund all deposits that had already been placed for the B1 and B2 (which it essentially cancelled).

Now 60 percent of the company has been acquired by Mullen Automotive for $148.2-million, another startup with ambitions to develop, build and sell EVs. The Southern California startup’s stated goal is to now get the B1 and B2 to market, but only after it first successfully launches a commercial electric truck, and it could be the B4 model (pictured below) that Bollinger had completely shifted its focus towards.

According to David Michery, CEO and chairman of Mullen Automotive,

This acquisition is one of the largest in the EV industry to date and provides Mullen with the unique opportunity to aggressively expand into the high-demand commercial EV space. The strong interest shown by major customers in all the high-volume segments like delivery, telecom, municipal services and utilities is a clear indication of the market’s desire for Bollinger’s vehicles.

He went on to say that

Combining Bollinger’s vehicles with our existing class 1 and class 2 EV cargo van programs gives us the chance to dominate the entire class 1-6 commercial light and medium duty truck segments. In addition, Bollinger will be able to leverage Mullen’s solid-state battery technology, making their current vehicles even more competitive as our technology launches across the total portfolio of EVs from both Mullen and Bollinger.

Bollinger is a true innovator and generational company, and we believe they have the potential to turn the sector on its head, similar to what the Hummer H1 did over 30 years ago. Bollinger is a transformative acquisition and paradigm shift for the EV industry.

No time frame for when the B4 and then the B1 and B2 would become available, but for the former, test programs with clients should begin this year or in 2023. The B4 was unveiled both in a chassis cab or bare chassis configurations, several wheelbase options, and its makers say the platform is also suitable for the creation of electric buses, shuttles and other walk-in applications, thus further expanding its spectrum of potential uses.

This cab-forward design falls under commercial vehicle class 4 (14,001 to 16,000 pounds) but the company wants to offer vehicles up to Class 6 (26,000 pounds) in the near future. It has an 800 volt electrical architecture, has LFP (lithium iron phosphate) batteries and a solid rear e-axle for power. The company didn’t say what the battery capacity is, only that that vehicles built on this platform could hit 100 miles range on one charge.