Home » Car Reviews » MPs dismiss calls to lower fuel prices despite driver demand – ‘Why are we not doing it?’

MPs dismiss calls to lower fuel prices despite driver demand – ‘Why are we not doing it?’ 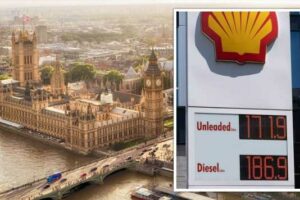 MPs came together last night to discuss the possibility of the Government implementing a 40 percent cut in fuel duty and VAT rates in response to record petrol and diesel prices. The Petitions Committee heard that drivers were making difficult sacrifices to be able to afford fuel as the spiralling cost of living crisis spirals.

A petition was launched in October 2021 which received more than 102,000 signatures, meaning the Government was obligated to discuss it in the Commons.

It called on the Government to address the rocketing fuel costs, with petrol and diesel both hitting record prices earlier this month.

Chancellor Rishi Sunak did introduce a fuel duty cut of five pence per litre in March when announcing his Spring Statement.

Many drivers, however, felt that it didn’t go far enough, saying many retailers didn’t pass on the savings to their customers.

Tonia Antoniazzi, the Labour MP for Gower in South Wales, opened the debate, highlighting that fuel prices were a “big concern” to most people.

She also pointed out the measures other European nations had put into place to protect drivers.

She said: “In Poland, the Government cut VAT on fuel to zero percent – something that UK ministers said we could not do within the EU. Why are we not doing it now?

“France introduced a 15 cents per litre discount on fuel prices on April 1 and has given €400 million in immediate aid allocated for hauliers.

“That money will be allocated to companies in the transportation sector based on the number of their vehicles and their tonnage.

“In Germany, the federal cabinet announced a relief package, according to which the energy tax on fuel is to be reduced to the minimum rate – a cut per litre of about 14 cents.”

However, the Exchequer Secretary to the Treasury, Helen Whateley, said that cutting VAT costs would not help businesses, who already benefit from claiming back their expenses.

She clarified that the Government could not control global oil prices, referencing the Russian invasion of Ukraine.

Helen Whateley, the MP for Faversham and Mid Kent, said the fuel duty reduction was worth £2.4billion in 2022 and 2023.

Coupled with the fuel duty freeze announced last year, it is worth around £5billion overall and equates to a reduction in fuel duty of about £100 over the year for the average driver.

In addition, the Government said that cutting fuel duty would carry a significant cost to the Exchequer.

Towards the end of the debate, Tonia Antoniazzi MP acknowledged that the petition was set up in October.

She added: “He was concerned in October, and many people have expressed their concerns alongside him.

“When we left the EU, one thing we were promised was that VAT on fuel would be cut, and it has not been.

“There is a knock-on effect on costs, as many Members have said, and the Government needs effective and rapid ways of putting money into our constituents’ pockets.

“Like the 100,000 petitioners, we want more to be done, because unfortunately they are not feeling the benefit of what has been done so far.”