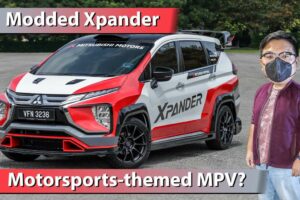 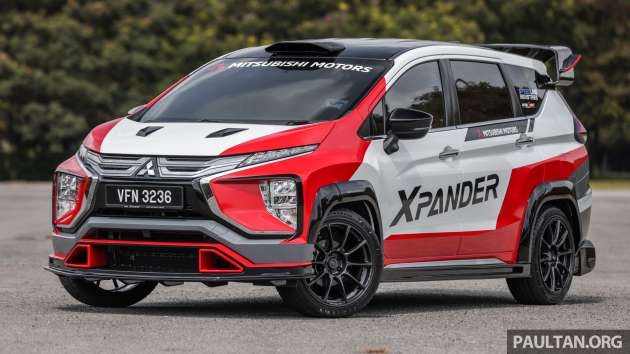 Whether on the move or stuck in traffic, have you ever imagined yourself being in a race car, while behind the wheel of your family sedan or SUV? Mitsubishi Motors Malaysia could probably relate. Together with Speedline Industries, the company has shown what a family car could look like when the imagination is not bound by financial constraints.

This one-off motorsport-themed Xpander you see here was inspired by the Xpander AP4 rally car which was commissioned by Mitsubishi Motors Indonesia and built by Team Ralliart New Zealand to AP4 specification – the Australian version of the FIA’s R5 category, hence the name. The AP4 produces 350 hp and 556 Nm torque, with all-wheel drive, and a six-speed sequential gearbox.

With Speedline Industries’ head Kenneth Koh – himself a local rally driver – being good friends with the Xpander AP4’s driver Rifat Sungkar, the idea was to make an Xpander with the same visual appeal as the real-deal rally machine for the Malaysian road. The custom-made cosmetic upgrades are extensive to say the least.

For starters, the front end is fitted with bumper extensions featuring two air inlets. As for the air vents on the front hood, they’re actually functional with cut-outs on the bonnet to extract hot air from the engine bay.

The side profile has been enhanced with side skirts and wheel arch extensions, but the rear-end is where the rally influence really shows. Aside from the massive rear wing that extends onto the C-pillar with slats on both sides, the rear bumper also features a protruding rear diffuser. Topping it off (literally) is a rally-style air scoop, 18-inch lightweight alloy wheels and racing decals inspired by Mitsubishi’s motorsport colours.

What’s the point of all this, you may ask? Well, it really goes to show how modifiable the Xpander really is, even despite it being a family MPV. You can’t possible imagine a Toyota Veloz or Honda BR-V getting the same treatment, can you? And as explained by Hafriz Shah in the video above, with Mitsubishi’s long-standing history in motorsports (which still runs to this day, in fact), the theme fits the brand as well. So, what do you think of this one-off project?