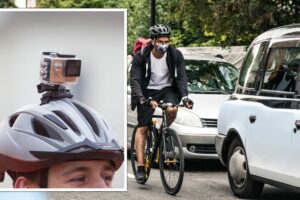 In recent weeks, a number of incidents have been highlighted where road users have debated the new Highway Code rules. At the end of April, a motorist was fined £417 after driving “too closely” to cyclists at “excessive speed”, which sparked fierce debate between viewers of the now-viral clip.

The motorist was slapped with a £417 fine and five points for careless driving.

The police warned motorists to drive sensibly because they too will be hit with hefty fines and points on their licence.

Bryn Brooker, Head of Road Safety at Nextbase, commented on the video and how cyclists and drivers can protect themselves when on the road.

Speaking exclusively to Express.co.uk, he said: “This video is a reminder that all road users should follow the Highway Code, and motorists should take additional caution around more vulnerable road users, such as cyclists or pedestrians.

“The new Highway Code changes, which changes the hierarchy of the road, mean the responsibility is with motorists more than ever.

“They must now take extra caution when overtaking or passing vulnerable road users.

“Where motorists cannot prove they acted properly, it is likely they will take most, if not all, responsibility for damages after an incident.”

With major Highway Code changes being introduced in January, it contained instructions on how all road users can keep each other safe on the roads.

Cyclists were given fresh guidance to ride in the centre of a lane on quieter roads, in slower-moving traffic and at the approach to junctions in order to make themselves as clearly visible as possible.

They were also reminded that they can ride two abreast, as has always been the case as it enables them to be safer in large groups or when riding with children.

However, they must be aware of drivers behind them and allow them to overtake if it is safe to do so.

Mr Brooker also pointed out that since the Highway Code rules were changed, more road users are taking matters of safety into their own hands.

Thousands of cyclists and drivers have invested in dashcams or helmet cameras to record their journeys in the event of an accident.

He added: “We are seeing an increase in road users submitting video to the Nextbase Dash Cam Safety Portal, particularly from cyclists and pedestrians, reporting motorists to their local police force.

“There has been a nearly 25 percent increase in submissions since the new Highway Code rules were announced.

“We recommend that all motorists protect themselves and their vehicles with a dash cam.”

Another video of a group of cyclists went viral after a Land Rover Defender also drove “too closely” to the cyclists on a single track road.

The Land Rover attempted to overtake the cyclists, knocking one of the cyclists into a ditch, resulting in them getting injured.

The driver of the Land Rover was fined £1,008 for driving without due care and attention, which was described as a “reckless overtaking manoeuvre”.

Northamptonshire Police said the driver should have come to a stop to let the cyclists pass by his vehicle in a safe manner.

Motorists are advised to give cyclists at least 1.5 metres of space when overtaking cyclists, a change that has caused a lot of confusion.