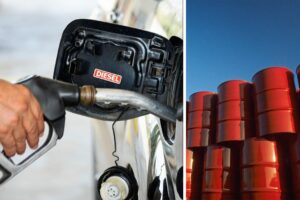 Andrew Lloyd, Chief Operating Officer at Intelligent Growth Solutions, called on more support for businesses to deal with the change.

Speaking exclusively to Express.co.uk, he said: “In continuing to entitle the agriculture industry to use rebated diesel, the Government has recognised that farmers need support both with energy pricing and with their green transition.

“More is being asked of British farmers as we look to grow more produce closer to home in reaction to challenges to long-established supply chains as a result of COVID-19, Brexit and the ongoing war in Ukraine.

“While continued access to red diesel and the efficient use of it as a fuel is part of the solution, we must continue to shift the dial if we are to address the growing climate emergency while continuing to guarantee food supply.”

Red diesel is the same as standard diesel, or white diesel, but is dyed red to make it more identifiable because it is taxed at a much lower rate.

For those who will no longer be able to use rebated fuel, they will need to use diesel or biofuel which the full rate of fuel duty has been paid for.

Operating costs are expected to rise by around 15 percent, with companies facing additional fuel expenses of between £100,000 to £400,000 per year, according to Research Management Association Scotland.

Some businesses may see prices increase by more than £170,000 one just one machine.

Based on research from Interact Analysis, a 50 tonne excavator would cost £171,600 per year more to use because of the price of red diesel.

One garage owner, Ross Molloy, said he feared 80 percent of his drivers had been hit by the new red diesel law.

The new restrictions have hit construction businesses, with Mr Molloy saying it can no longer be used for heating, saying “everything is going to go up [in price]“.

In anticipation of the ban, many drivers found spiking prices in red diesel, alongside the record fuel prices that were being seen for petrol and diesel.

In March, many builders, farmers and construction workers saw prices for red diesel increase dramatically, with some businesses reporting the price to be as high as 112p per litre.

Red diesel is mainly used for off-road purposes, such as to power bulldozers and cranes used in the construction industry, or to power drills for oil extraction.

Mr Lloyd also looked at the impact it will have on drivers in the future, pointing to a potential tax rebate system.

He continued, saying: “Greater levels of support are required for farming to achieve its ambitions to become greener.

“A key element of this is incentivising renewable energy usage, particularly in the face of soaring electricity costs.

“We would like to see equivalence with red diesel through a similar tax rebate, and a commitment to long-term green pricing tariffs.

“Doing so would encourage wider adoption of sustainable starter plant and food production methods; enabling the economic case for technologies such as vertical farming.”

Before the ban was introduced, many called for a delay, citing the rising cost of living, as well as supply chain issues and the global increase in oil costs.

While it was initially announced in 2019, the Government was firm that red diesel would be widely restricted from April 1, 2021.