Motorcycles with loud exhausts – no seizure, only advocacy and not summons says Transport Minister – paultan.org 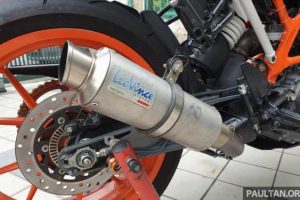 Motorcyclists with loud exhausts fitted to their machines will face an interview and advocacy action from JPJ instead of a summons, says Malaysian Transport Minister Datuk Seri Wee Ka Siong. This is in response to negative reactions from the motorcycling public against the over-bearing enforcement by police, JPJ and the Department of Environment against noisy motorcycle exhausts, enforcement of which began in mid-February.

Touching on statements made in a speech by UMNO president Datuk Seri Dr Ahmad Zahid Hamidi during the 2020 UMNO General Assembly in Kuala Lumpur, Wee said JPJ director-general Datuk Zailani Hashim had been informed that a notice be issued for an interview process with advocacy action instead of the issuance of a summons, reports Bernama. “I would like to inform that the Ministry of Transport (MOT) has decided that at this stage, it is better to focus on the advocacy approach which is to issue Notice 114 rather than than to issue summons,” said Wee during a media conference. JPJ Notice 114 requires the recipient to present his or herself at any JPJ branch for the purpose of investigations and information gathering.

Additionally, Wee said a meeting was held between the Inspector-General of Police (IGP) Tan Sri Abdul Hamid Bador and JPJ to co-ordinate advocacy efforts as the matter also involves police. For offences pertaining to loud exhausts and other modifications, a penalty of up to RM2,000 or imprisonment not exceeding six months is imposed, and may include seizure of the vehicle under Section 64 of the Road Transport Act 1987, which will be detained till made road worthy. As of March 5, the police Traffic Investigation and Enforcement Department (JSPT) has issued a total of 10,166 summons against vehicles, of which 1,423 were for modified motorcycle exhausts. During the period of operation, 474 motorcycles, seven cars and two other vehicles were seized for offences 540 roadblocks across Malaysia.

At the height of the crackdown, the IGP came out to say activities against noisy exhausts was on safety grounds, rather than a revenue raising operation. “Don’t seize the motorcycles. How do they want to continue to survive when that is the only vehicle they have to make a living. Are we blind, and cruel, to let the people to continue to suffer,” said Zaid in his speech during the assembly.