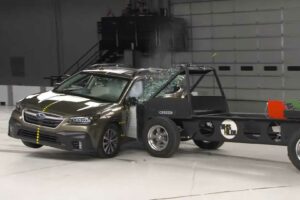 There aren’t many new midsize cars on the market today, but updated crash-test standards from the Insurance Institute for Highway Safety (IIHS) suggest most don’t fare well in a real-world side-impact collision. In this instance, real world represents vehicles that are quite common on roads these days – crossovers and SUVs.

The new side-impact test uses a heavier impact barrier weighing 4,200 pounds, compared to 3,300 pounds for the previous test. The barrier speed is also up to 37 mph versus 31 mph, generating 82 percent more energy at impact than the prior method. The changes were made after data from actual collisions showed more severe damage than expected based on current testing criteria. IIHS says the updated test better simulates a side collision with a typical SUV.

As a result, only the Subaru Outback managed to score a good rating out of seven vehicles tested. The Hyundai Sonata and Volkswagen Jetta received acceptable ratings, with IIHS noting more intrusion into the passenger compartment compared to the Subie. All three cars were recognized for having good airbag protection.

The Honda Accord received a marginal rating, with moderate intrusion and elevated risk of pelvis and head injuries resulting from a crash. Three vehicles – the Toyota Camry, Nissan Altima, and Chevrolet Malibu – received poor ratings. IIHS says intrusion into the passenger compartment was substantial for the Altima and Malibu, with the Camry faring a bit better. But all three showed a moderate or high risk of head, neck, or torso injuries. In most cases, the impacts caused the heads of driver or passenger dummies to slip below the airbag, hitting the window sill directly.

“With vehicles that sit lower to the ground, the striking barrier hits higher on the door panel,” says IIHS President David Harkey. “That potentially puts sedans and wagons at a disadvantage in this evaluation but reflects what happens in a real-world crash when these vehicles are struck by a higher-riding pickup or SUV.”