Most Anticipated Electric Cars Of 2022 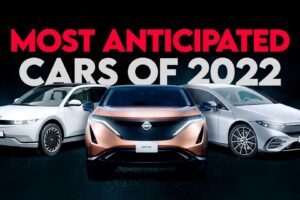 Strap yourself in folks, because we’ve scoured the upcoming EVs and come up with our list of the 10 most anticipated EVs for 2022! It was tough to do and there was a lot of internal debate. Let’s get stuck in straight away!

We’re hugely excited about the upcoming F-150 Lightning. For those of you not living in the US or Canada, it’s hard to understand just how popular this segment of truck is! Ford sell nearly 1 million of the F series every year. So for an all-electric beast like the Lightning to hit the market, our hearts start pounding. With its ‘Mega Power Frunk’, incredible Vehicle to Load capability, this is really pushing the boundaries of what a truck can be!

Bring it on Ford…start ramping up production because you’re going to struggle to satisfy the demand!

We just had to put the IONIQ 5 on the list! Sure, it was in some customer driveways in some regions in 2021, but it’s not going to hit the US market until 2022.
With prices in the US due to start around the $40,000 mark, we were amazed by the value! We actually expected it to be much higher. We just love the design of the IONIQ 5…it’s so fresh, spacious and functional all at the same time! With a real-world range above 250 miles, and probably above 300 if you treat it nicely, this car is going to be a real winner! Let’s see if the US market receives it as well as the UK one did!

There was no way we were leaving the Kia EV6 off our list. We had this car on our channel a few weeks ago and we absolutely loved it. We think it looks beautiful, especially that character line that starts behind the front wheel, swoops up at the rear and transforms into a light bar that sweeps across the back.

On the inside, the car feels great. It’s set up as more of a driver’s car than its sibling, the IONIQ 5. With a range of nearly 300 miles and some pretty good power to boot, it’s a compelling option. We don’t yet have pricing for the US, but we suspect it won’t be too far off the IONIQ 5.

And we haven’t even mentioned the GT version that is due…oh man that thing is electric…literally! It’s going to do the 0-62mph sprint in a smidge over 3 seconds….amazing!

We really debated whether or not put Ariya on the list. In the end, we went for it because we feel that Nissan has built a huge amount of loyalty with the LEAF over the last decade. Although they dropped the ball over the last few years when they had occupied such a dominant position, we’re hoping that the Ariya will get them back on track, despite being a wholly different car on a different platform.

It looks like it may be priced a little high to hit the numbers we’d hope for, and we think it may struggle to take market share from the likes of the iD.4. But here in Europe, it’s due to come with a very useful 22kW AC on-board charger. And if it can get close to its 500km WLTP rating from its 87kWh usable battery then it may surprise a few people.
It’s on our list, but admittedly it doesn’t sit well, and it’d be the first one to go if we had to pare the numbers down.

Time for a bit of uber-luxury now with the Mercedes EQS. This has been a bit of a sleeper car, with the likes of the Lucid Air and Tesla Model S Plaid hogging the headlines. But Mercedes may like it that way. We’ve been a little underwhelmed with Mercedes performance in the EV space, so we’re hanging a lot of hope on the EQS.

But the range and tech you get is incredible! It promises to be the ultimate luxury sedan with great range and efficiency thanks to having pretty much the lowest ever drag co-efficient of any production car. Beaten only by the EV1 really.

The BMW i4 gets us really excited and is, for us, one of the most hotly anticipated cars of 2022. Sure, a select few customers got their keys in late 2021 at the BMW Welt, but serious numbers won’t be seen until 2022.

Now, anytime someone mentions liking the i4, the Tesla uber-fans start hurling 0-60mph statistics like angry chimps in the forest. But we feel that distracts from the real draw of the i4. It will lose to the Model 3 Performance in a lot of categories, but the i4 will offer something in terms of driving feel and a sense of luxury that is going to really touch a nerve. There are a lot of people out there that will find themselves drawn to full BEVs through the Gran Coupe form factor of the i4 M50.
We can’t wait to try one out!

We love a good estate car here on this YouTube channel. And we were really impressed by the MG5 when we drove it a few months ago. It was amazing value, but it wasn’t a great car. MG are refreshing it with updated software, new bodywork and an upgraded battery.

It’s going to have 250+ miles range, 180+ horsepower, 580 liter boot…and all for around €30,000! It’s not the sexiest car on the list…but we need more good-value EVs out there and this is a welcome break from the SUV form factor!

Ok…so we’ve kind of already had the Lucid…but they’ve been the upper-end editions that are hugely expensive. What we’re really looking forward to is the ‘Pure’ edition. Let’s call this the…eh…’affordable’ Lucid!

So it’s cheaper, with a smaller battery of 85kWh usable and not quite as much luxury. But this is still a car with a whopping range that will be well over 300 miles in the real world!

We debated this one hard…but in the end it came down to diversifying our list. Although we love the likes of the Tesla Model Y, we get a little tired of crossover SUVs dominating the EV conversation. So when something like the Ami comes along, we get really excited. I mean just look at it!

Where I am in the UK, we’ll get it for around £6,000. And considering how cheap it will be to run we reckon that’s not bad! In France, as this is classified as a quadricycle, you can legally drive it at the ripe old age of 14!

But there are downsides…it’s slow, and won’t even reach 30mph. Range from its 5.5kWh battery will be around 40 miles, and it’ll charge up from a regular domestic socket in about 3 hours.

Citroen…I’ll have two thank you very much!

And last on our list is something that I am buying the second I can get my hands on it…it’s the Ola scooter. There’s a couple of versions, but I’ll be going for the 4kWh S1 Pro that’ll do around 100 miles and reach speeds up to 70mph!

But the best thing about the Ola is not just the specs and really impressive tech…it’s the price! We don’t yet know the exact pricing as it will translate to the US or European markets, but it’s almost certainly going to substantially undercut the likes of Vespa and Niu’s offering!

Cannot wait to see these zipping around!

And some honorable mentions now….We decided to keep the Tesla Cybertruck off the list. Why? Not because it doesn’t deserve to be there…but because we feel like it’s been around for years already and we’re not sure that it’s actually going to arrive in 2022, at least not in significant numbers.

We’re also leaving off the Hummer EV. Why? Well, we’re not sure it’ll make 2022. But also, it’s not something we’re particularly excited about. It’s an amazing exercise in terms of testing what can be done with an EV. Something that size moving that fast is incredible…but for us we can’t see its practicality and use-case scenarios being something truly valuable. Maybe a controversial one…let us know in the comments!

And we haven’t even mentioned the Rimac Nevera…agh there’s too many to choose from!

So there you have it folks, our picks for the 2022 year.  We found it so tough to settle on 10…and you know what…if we did this list again in a month, we’d probably change our minds again! But that’s a great thing! A list like this would have been so boring even 5 years ago…but now…look at the choices we’re getting!

So, let us know what you think in the comments below. We love to hear from people all over the world.