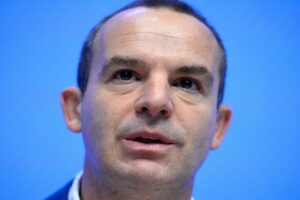 With the increase in the cost of fuel not showing any signs of slowing down, motorists across the country will attempt anything to save some money. And now, Martin Lewis, who is arguably Britain’s most famous money-saving expert, has recently taken to Twitter to explain to drivers how they can find the cheapest fuel nearby.

With the cost of filling up an average car now costing over £100, motorists have been urged to follow the advice as it can make a visible difference.

Mr Lewis explained to car owners that there are several websites that compare the prices of fuel in any given area.

Writing on Twitter, the expert said: “Find the nearest cheapest petrol station near you… Petrolprices.com.”

All drivers need to do is enter their postcode.

They can then see the nearest petrol station to their address with prices of both diesel and petrol outlined.

Signing up, however, is not required if drivers use the company’s app.

One user wrote underneath Mr Lewis’ post: “Why do I need to give my information and sign up?”

The expert replied: “Because they want to build a database in return for letting you access theirs!”

The cost of filling up an average family car has now exceeded £100 for the first time, with research from RAC showing motorists must now shell out £100.27 to fill up a 55 litre tank with petrol and £103.43 for diesel.

Prices have been on the up for a while now but have kept rising after it was revealed petrol stations had swelled costs by the biggest daily margin for 17 years on Tuesday.

RAC spokesman Simon Williams said: “More radical government intervention is urgently needed, whether that’s in the form of a further reduction in fuel duty or a VAT cut.

“As it is, drivers surely won’t be able to cope unless something is done to help.

“This is fast becoming a national crisis for the country’s 32 million car drivers as well as countless businesses.”

Mr Williams added: “While fuel prices have been setting new records on a daily basis, households up and down the country may never have expected to see the cost of filling an average-sized family car reach three figures.

“It’s becoming clearer by the day that the Government must take further action to reduce the enormous financial burden on drivers.

“The Government needs to recognise that the 5p duty cut is a drop in the ocean and more needs to be done now to support drivers who are feeling the pain every time they go to fill up their cars.

“It should also not be forgotten that as fuel prices continue to rise, so does the amount the Government makes in VAT.

“The 5p the chancellor gave away in his duty cut in March has already been replaced by the 5p extra he is now making in extra VAT following the invasion of Ukraine just a month earlier.

“A temporary cut in VAT on fuel, or a deeper duty cut, are surely what is needed now.”