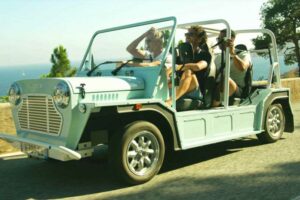 The Moke International Electric Moke Californian debuted a few weeks ago without any pricing information. That changes today, with the company announcing that the US-bound EV will cost $41,900. Interested customers can pay a $990 refundable reservation fee to secure a build slot starting today.

The new Moke Californian is now all-electric, powered by a 44-horsepower (33-kilowatt) rear-mounted electric motor. Its more powerful than the gas version sold in the US in the late 1970s, which produced only 39 hp (29 kW). It’s not a big jump, but it’s enough to cut the car’s time to 34 miles per hour (55 kilometers per hour) from 6.3 seconds to 4.3.

The Californian, which is exclusive to the US market and the first new Moke to go on sale here since 1982, is highway-legal thanks to its 50 mph (80 kph) top speed. This is the first time a Mini Moke model in the US is legal to drive on the highway. It offers up to 80 mi (120 km) of range, but that figure is based on the forgiving WLTP testing cycle. We expect to get less than that in the US. According to the company, it takes four hours to recharge with a Type 1 charger.

Moke will limit production to just 325 cars in the US per year. This follows the 2015 Low Volume Motor Vehicles Manufacturers Act that passed, allowing heritage brands like Moke to produce derivatives of any of their models over 25 years old. However, they have to comply with current Federal motor vehicle safety standards.

You can configure the Moke Californian right now, too. The company offers five exterior colors: Wave Blue, Sunset Orange, Sunlight Yellow, Scuba Blue, and Granite Gray. The only optional extra is the full canopy with doors, but there isn’t a price associated with the upgrade.

Moke started operations building light military vehicles before they became popular with farmers. By the late 1970s, it was popular enough to export a more modern Mini Moke version to the US – and the rest is history. The company didn’t say when it would begin deliveries.