Mobileye and Sixt Will Launch Robotaxis Next Year 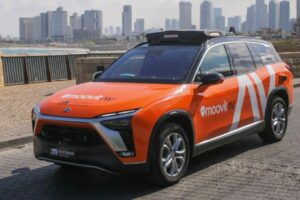 Intel-owned autonomous developer Mobileye plans to launch a robotaxi service in Germany next year, operated in a partnership with rental chain Sixt and mobility data start-up Moovit. The company used this week’s Munich IAA show to unveil the plans for the start of robotaxi service in Munich, which will take place with safety drivers behind the wheel, while also unveiling an electric six-passenger crossover that will be produced for the effort, based on the Chinese-market Nio ES8.

The 2022 testing will be partially made possible by a new law in the country that permits driverless vehicles on roads, but the robotaxis will need further regulatory approval to go from testing to commercial operations.

“Germany has shown global leadership toward a future of autonomous mobility by expediting crucial AV legislation,” said Intel CEO Pat Gelsinger. “Our ability to begin robotaxi operations in Munich next year would not be possible without this new law.”

Mobileye envisions the transition to driverless EVs further down the road, but is laying the groundwork now in a partnership with European rental chain Sixt. But it’s not saying just when this might happen, and which geographic areas are likely to see truly driverless vehicles first. Such a taxi is expected to feature Level 4 autonomy, which requires no driver input, but only when certain road or usage conditions are met.

In practice, the difference between Level 4 and Level 5, the latter of which allows vehicles to operate without a driver under all conditions, often boils down to geofencing—Level 4 vehicles would be confined to certain parts of the city or certain routes of various scales, to be defined by their companies.

“Riders will be able to access the service via the Moovit app as well as the Sixt app,” Mobileye said. “The autonomous robotaxi offering will be included in Sixt’s holistic mobility platform ONE, which combines in just one app products for ride hailing as well as car rental, car sharing, and car subscriptions.”

Mobileye noted that the plans for the rollout of robotaxi service in Germany represent the first known instance of collaboration between a mobility services provider, in this case Sixt, and a tech supplier, which also points to future business models of rental car companies offering vehicles with high levels of autonomy as a selling point.

Testing of Level 4 robotaxis has picked up over the past year and a half, with a number of developers conducting trials in several countries, most with drivers behind the wheel. But in a few instances, such as at the Tokyo Summer Olympic Games and at the upcoming Winter Games in Beijing, driverless taxis will offer rides to passengers in geofenced areas. The high-profile nature of these debuts during the games is expected to give autonomous tech developers a credibility boost if all goes well, after a few years of intense skepticism following some widely publicized vehicle crashes.

These cautious approaches to Level 4 autonomy—complete with smaller-scale experiments with drivers behind the wheel—are expected to serve as stepping stones toward the launch of commercial robotaxi operations without drivers in the coming years, with a few unknowns still remaining, some of which include regulatory approval in various countries and states.

Overall, it’s safe to say that Level 4 tech is on its way to being accepted in limited areas and well-mapped traffic environments.