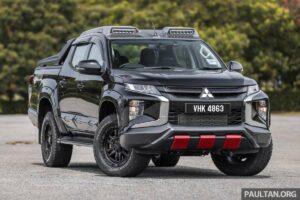 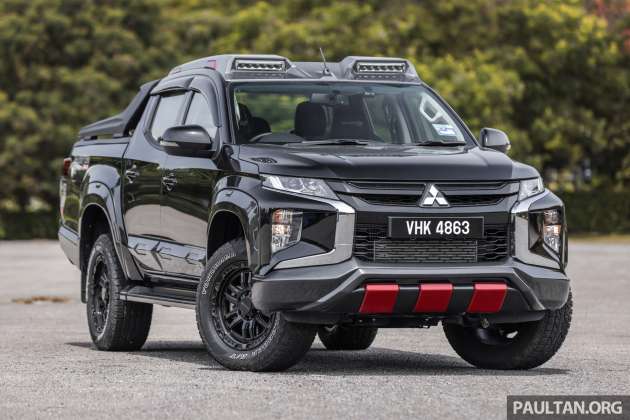 Teased last month on the company’s social media channels, the Mitsubishi Triton Phantom Plus Edition has now been launched in Malaysia. This is a limited run variant that is capped at 1,000 units, and is priced at RM139,700 on-the-road without insurance in Peninsular Malaysia. This prices the Phantom Plus Edition between the Athlete and the AT Premium, which are listed at RM146,600 and RM126,900, respectively.

As such, this builds upon the specification of the AT Premium variant. At first glance, setting the Phantom Plus Edition apart from other variants of the Triton is its styling; the limited-run double-cab pick-up truck gets LED lighting units in a roof-mounted housing, with front and rear bumper garnish with red accents. For convenience, the cargo tray gets a tailgate assist mechanism.

Adding to the visual aggression is its side door moulding, matte-finished sports bar, Phantom tailgate moulding with a rear spoiler along with wheel arch extensions which house a set of 18-inch alloy wheels finished in gloss black, and shod in Yokohama Geolandar all-terrain tyres. Topping off the exterior styling is a set of Phantom Plus decals.

The interior of the Triton Phantom Plus Edition also receives the variant-specific treatment, getting black leatherette upholstery for its seats, which get a chunky, almost honeycomb-like pattern along with red contrast stitching. The floor mats also get contrasting red piping.

Being based on the specifications of the AT Premium variant, the Triton Phantom Plus Edition misses out on ADAS kit from the range-topping Triton Athlete which includes Forward Collision Mitigation, Blind Spot Warning, Lane Change Assist, Rear Cross Traffic Alert, Auto High Beam and Ultrasonic Misacceleration Mitigation System.

Motive power for the Triton Phantom Plus Edition comes from the manufacturer’s 2.4 litre MIVEC turbodiesel engine rated to produce 181 PS and 430 Nm of torque, and these outputs are sent all four wheels through a six-speed automatic transmission. Here, the Easy Select 4WD system gets an off-road mode, and is joined by a hill descent control function.

Priced at RM139,700 on-the-road without insurance in Peninsular Malaysia for private registration, the Mitsubishi Triton Phantom Plus Edition is covered by a five-year, 200,000 km warranty, and comes exclusively in Jet Black Mica exterior paint finish.