Mitsubishi Triton Gets Rally Ready For Competition In November 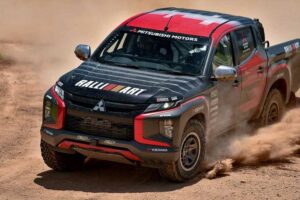 Mitsubishi has an illustrious history in rallying, ranging from the WRC to the Paris-Dakar. Its latest vehicle for off-road competition is a specially prepared Triton pickup. The truck will compete in the 2022 Asia Cross Country Rally that will kick off in November.

The racing Triton fits into the FIA Group T1 class for prototype cross-country vehicles. The basis is the double-cab version of the truck from the Thai market. It gains a custom suspension for off-road work. The preparation includes a front and rear limited-slip differential and wheels with large-diameter tires. The team lightens the hood and doors by fitting carbon-fiber pieces. The interior is stripped for competition and has a roll cage.

Power comes from a 2.4-liter turbodiesel four-cylinder that makes 178 horsepower (133 kilowatts) and 317 pound-feet (430 Newton-meters) of torque. The engine gains stronger sealing against water and a snorkel to cope with river crossings. The power runs through a six-speed manual gearbox to Mitsubishi’s Super Select 4WD-II system.

Mitsubishi conducted a two-day test of the truck in Thailand on June 27 and 28. The development focused on evaluating the reliability and durability of the chassis and engine. You can see some of that action in the video above. There will be another session in August and a shakedown in October.

“Having covered more than 800 kilometers in two days, the rally car showed its great performance throughout the tough endurance tests as we expected, and now we are confident that our preparation is on the right track,” said Hiroshi Masuoka, team director of Team Mitsubishi Ralliart.

The 2022 Asia Cross Country Rally lasts a week and runs along about 1,056 miles (1,700 kilometers) of stages in Northeast Thailand and ends near Angkor Wat in Cambodia.

After an 11-year hibernation, Mitsubishi revived the Ralliart name in 2021 with a plan to focus these models on Southeast Asia. Things kicked off to a lackluster start with special packages for the Pajero Sport and Triton that loaded the models with extra decals. Later, the Vision Ralliart Concept outfitted an Outlander with a bodykit and special wheels. In 2022, the brand introduced a whole range of accessories in Japan for several models.

If you want to hear a discussion about Mitsubishi in the US, check out this episode of Rambling About Cars: