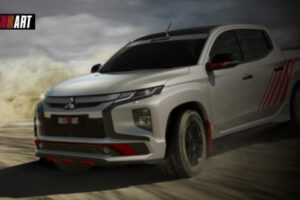 Mitsubishi fans will certainly remember Ralliart, which is the brand’s in-house motorsport and tuning division. From around the 1990s right on through to the 2000s, Ralliart has been heavily involved in the world of rallying, with a string of Lancer Evolutions being the most notable cars to wear the name. During its heyday, Ralliart secured 12 Paris-Dakar Rally titles and helped Tommi Makinen secure four driver’s titles in the World Rally Championship.

Sadly, monetary woes back then forced Mitsubishi to scale down operations of its Ralliart division, with the company announcing in March 2010 that it will stop supporting its customer racing programmes and cease production of Ralliart-branded products.

After an 11-year hiatus, Ralliart is back! This was confirmed during Mitsubishi’s FY2020 earnings announcement, where the company wants to bring back what it describes as “Mitsubishi-ness driving.” “For customers who wish to experience our Mitsubishi-ness, we will launch custom-made accessories for our model lineup as well as re-entering motorsport events around the world,” said Mitsubishi CEO Takao Kato in a report by Forbes.

Further details about division’s return are scarce for now, but the presentation slides suggest the Triton will be one of the models that will get the Ralliart treatment. A string of new Mitsubishi models could also go through the same process, with electrification likely being involved. Welcome back, The Spirit of Competition.