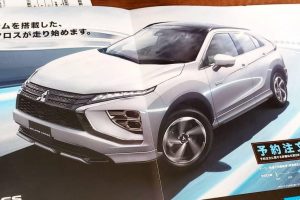 Three years into its lifecycle, the Mitsubishi Eclipse Cross is set to receive a significant facelift over the coming months. The revised SUV was teased last month with a single shadowy image; now, brochures of the car has been leaked over at Spanish automotive forum Cochespias, showing the new design in full.

Both the front and rear ends have received comprehensive makeovers. The face borrows elements from recent concepts like the Engelberg Tourer/e-Yi and e-Evolution, sporting a flush-fitting gloss-black grille with fine hexagonal perforations. The headlights are also new, with a two-tier design also seen on the Xpander – the slimmer upper strip now only contains the LED daytime running lights.

The main lighting units have been moved down to the bumper, nestled in oval pods. The bumper sees greater use of body colour, including on the revised skid plate; the side body cladding is also now painted in the same hue as the rest of the car. But it’s the rear end that sees the biggest change – the distinctive full-width tail lights and split rear windscreen are gone.

In their place are more conventional L-shaped tail lights (very reminiscent of the Xpander here) and a single pane of glass. The rear bumper retains the outgoing model’s design but is again finished in body colour, while the skid plate design mirrors the front end. Finishing off the look are new turbine-style alloy wheels.

The facelifted Eclipse Cross will also get a new plug-in hybrid variant. No details have been released just yet, but expect the technology to be derived mainly from the Outlander PHEV. An all-new version of that car, due out next year, should get the powertrain from the Engelberg Tourer, consisting of a 2.4 litre engine, twin electric motors (one for each axle), a 20 kWh battery and a claimed all-electric range of more than 70 km.