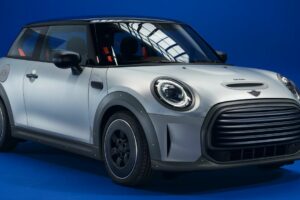 This is the MINI Strip, a one-off concept that is based on the existing three-door Cooper SE and guided by the overarching theme of “Simplicity, Transparency, Sustainability.” The Strip is the result of a collaboration between MINI and famous designer Paul Smith announced last November, with both providing their inputs on sustainable design for the past few months.

“I’m incredibly grateful for the opportunity to rethink the iconic MINI. I know and love the existing car, but by respecting the past and looking to the future we have created something very special,” said Smith.

“I feel very privileged that the MINI team have given me the confidence and freedom to think laterally about the approach to the design of the car. Together I think we have created something truly unique, by going back to basics, reducing things down and stripping the car,” he added.

On the outside, the car’s body was deliberately left in its unfinished state with no coloured paint applied in order to showcase the raw materials used. The grinding marks from the factory were also left intact on the galvanised steel plates, with this effect being dubbed “the perfect imperfection” by Smith. Despite lacking coloured paint, the body does receive a thin film of transparent paint to protect against corrosion, along with other special touches. For instance, the charging flap sports an engraved drawing of an electric plug of Smith’s own design, hiding a splash of neon green when opened.

That’s not all, as the cladding around the wheels were 3D-printed from recycled plastic and feature visible screws. The latter relates to Smith’s passion for bicycles, which are easily dismantled in order to replace or modify individual parts. Meanwhile, the front, side and rear apron inserts are also produced using a 3D printing process to ensure a matching texture with the black bands.

Recycled Perspex is another sustainable material used on the Strip, particularly on the blanked-off grille and wheel covers, but it is most noticeable on the roof that gives onlookers a view of the bare structure of the bodyshell inside.

On that mention, Smith wanted the cabin to be finished in blue for not only an eye-catching effect, but to breath some “life” into areas that are typically covered up. This provides the largely stripped-down interior with its own aesthetic appeal, making it bare while feeling “dressed” at the same time. The Cooper SE’s dashboard is gone here, and so is nearly everything else, with their replacements being simplified and given more graphical interpretation. The new dashboard is now a semi-transparent section with a smoked-glass finish, while a smartphone takes the place of what used to be an infotainment system.

The smartphone is connected automatically to the car and becomes the media control centre, while the only physical controls are located further down, where toggle switches for the power windows and start/stop function are seen.

Before stepping in, opening the doors will reveal the signature Paul Smith stripes in a composition of five colours, which is another small piece of the Strip’s details. Just like the exterior, recycled materials are prevalent inside the leather- and chrome-free cabin, with seats upholstered in a fully recyclable knitted fabric. The floor mats are also made from recycled rubber and their terrazzo-like pattern is a by-product of the process done to make them.

Elsewhere, the dashboard topper pad, door shoulders and parcel shelf are made from recycled cork, which is an open-pore material, as with the knitted fabric. Together, they contribute to improved interior acoustics.

For the driver, the steering wheel is reduced to the most essential functions and features a rim wrapped in handlebar tape like on a road bike. It also has three aluminium spokes with visible screws and a mesh overlay on top of the airbag, while a small fabric Paul Smith label serves as a reminder of the collaboration.

The same mesh material is also used for the door panels, with the level of transparency differing depending on the angle of view. Wound climbing rope make up the pull handles and are orange in colour just like the seatbelts. Nearby, the door openers themselves are milled from aluminium, and the lack of interior trim means you’ll see the exposed airbags on the roof pillar and cabling.

“For me, the MINI STRIP shows in an impressive way that MINI and Paul Smith share the same bold way of thinking about the future in terms of innovation and design – and together we create more. Paul asked essential questions right at the start of the design process with his non-automotive and therefore fresh perspective. We are proud to have developed such a strong character statement together,“ explained Oliver Heilmer, head of MINI Design.