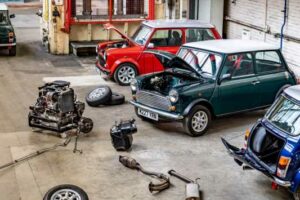 MINI will offer a fully electric conversion, with 121bhp and 100 miles of range, for its classic models at its Oxford factory

A group of engineers at MINI’s Oxford plant have devised an EV conversion package for the iconic hatchback to create the MINI Recharged. The fully electric drivetrain can be installed in existing classic MINIs, and offers 121bhp, significantly more than standard.

Development for the MINI Recharged began after the brand showcased a one-off classic MINI with EV running gear at the 2018 New York Auto Show. Based on positive reception, MINI decided to offer a similar service to existing owners of classic MINIs.

The Recharged conversion replaces the combustion engine with an electric motor and a battery pack. These changes are also reversible, and it’s possible to revert to the original drivetrain after the conversion. MINI will store the original running gear for each customer, allowing them to revert to standard spec if desired.

With a single electric motor producing 121bhp, the MINI Recharged is far more powerful than any classic MINI in standard trim. For reference, the end-of-the-line classic MINI Cooper 1.3i produced 62bhp. The MINI Recharged can launch from 0-62mph in around 9 seconds, and offers an electric range of around 100 miles. The battery can be charged at speeds of 6.6 kW.

The brand highlights that the zero-emission drivetrain of the MINI Recharged allows it to enter low-emission and congestion zones in big cities without incurring a fee, furthering its ability as a classic city car.

Speaking on the project, MINI boss Bernd Korber said: “What the project team is developing preserves the character of the classic MINI and enables its fans to enjoy all-electric performance. With MINI Recharged, we are connecting the past with the future of the brand.”

The retrofit is primarily a mechanical exercise, but the interior of each electrified classic MINI receives a bespoke central gauge cluster, which displays gear selection, drive temperature, predicted range and speed. Numerous personalisation options are on the horizon, too, so specially designed variants of the MINI Recharged will be offered as part of the programme.

MINI has yet to detail the cost of the EV conversion, but specialist companies such as London Electric Cars offer a similar service starting from around £25,000. Given that the Recharged is a factory conversion, we expect a steeper price than that.

Check out our thoughts of the MINI Classic electric here…