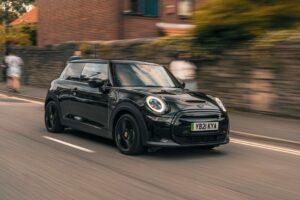 MINI has brought its blacked-out Shadow Edition specification to the Hatch, Convertible and Electric. All three are available to order now with prices starting from £22,340.

The special edition MINI Hatch and Convertible are based on Sport trim-level cars, meaning they feature 18-inch alloy wheels, a John Cooper Works bodykit and a larger rear spoiler. Front and rear LED lights are also included as standard.

Meanwhile, the MINI Electric Shadow Edition is based on the range-topping Level 3 specification, which means it comes with 17-inch alloy wheels, adaptive LED headlights, a head-up display and parking assist as standard.

Inside, all three new Shadow Edition cars have an Anthracite headliner, Piano Black dashboard trim and unique treadplates. The standard seats have also been swapped for John Cooper Works sports seats, and there’s a new sports steering wheel for all models.

Along with the styling tweaks, the Shadow Edition trim comes with additional kit. The larger 8.8-inch infotainment system is standard, as are rain-sensing wipers, automatic headlights and an intelligent emergency call function.

Prices for the MINI Hatch start from £22,340 for the three-door model and £23,040 for the five-door model, while the Convertible variant is priced from £25,600. All three options can be specified with either the Cooper or Cooper S petrol engines.

The former system is based around a turbocharged 1.5-litre three-cylinder petrol engine, which produces 134bhp and 220Nm of torque. It’s mated to a six-speed manual gearbox as standard, although an eight-speed automatic can be had for an extra £1,400.

MINI’s Cooper S powertrain uses a turbocharged 2.0-litre four-cylinder petrol engine with 176bhp and 280Nm of torque, which is enough to shove the three-door Hatch from 0–62mph in 6.6 seconds, before it reaches a top speed of 146mph. Buyers also have the choice of either a six-speed manual or seven-speed double-clutch automatic gearbox.

Now click here to read our review of the MINI Electric…