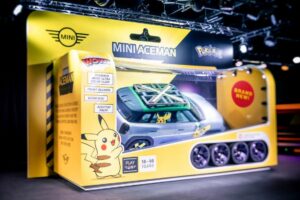 MINI has announced that it will be the main sponsor at this year’s Gamescom, which takes place in Cologne, Germany from August 24-28. To commemorate the occasion, the carmaker has partnered with Pokémon to create a special version of the Concept Aceman that it presented back in July.

Officially called the ‘MINI Concept Aceman with Pokémon Mode’, the exterior of the playful electric crossover features some unique touches like a Poké Ball in the centre of the wheel rim as well as several decals of the franchise’s star, Pikachu. Presented in a supersized version of a clear box packaging typically used for action figures, the concept is described as the “ultimate collectible for MINI fans and gaming enthusiasts.”

While the changes on the outside are relatively minor, MINI paid a lot more attention to the interior. Before even stepping foot in the cabin, passengers are greeted by a unique ‘MINI x Pokémon’ image projected unto the floor that reinforces the belief that the designers are fans of electric-type Pokémon.

Once inside, the full Pokémon Mode is on display, with Pikachu taking over the circular OLED display. Through advanced projection technology, programmed animations extend across the dashboard, front doors and apron projection.

Two animation loops enhance the immersion, including one where the Poké Ball first appears in the OLED display and moves before opening in a blue glow that moves from the OLED display through to the dashboard, the light bar of the doors as well as the apron projection through the vehicle interior. In another loop, Pikachu appears in the display at the start before launching a bright yellow lightning attack that also travels through the vehicle via the interior doors as well as the apron projection.

“A major feature of MINI is the positive and future-oriented approach to individual mobility as well as the distinctive design of the vehicles. Gamification will play an increasingly important role in the MINI of the future and offer a unique experience for our customers,” said Stefanie Wurst, head of MINI.

“In cooperation with Pokémon, the shared joy of the franchise brings two iconic characters, that are a perfect match, together with millions of fans. This is how we reach a whole new target group at Gamescom 2022, as an event for modern fandom, gaming and pop culture,” she added.

In addition to the Pokémon-themed EV, MINI also created an exclusive MINI Art Toy for Gamescom 2022. Like the concept car, the MINI Art Toy is said to “embody agility and a self-confident presence.” For instance, the carmaker says the X-O symbols are reminiscent of the interior design as well as the playfulness of the Concept Aceman.