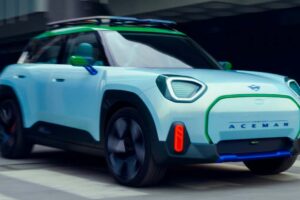 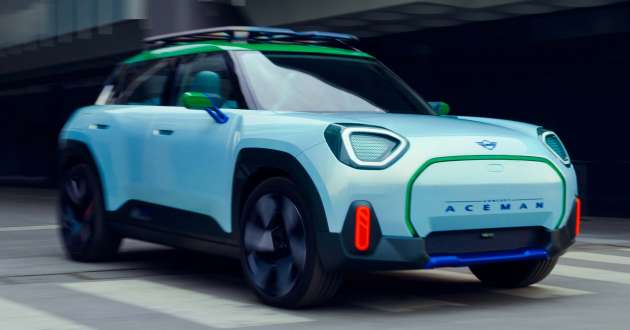 MINI is showcasing its future design direction with this, the Concept Aceman that “heralds a new design era for MINI,” said head of BMW Group design Adrian van Hooydonk. Teased last month, what we now see as the Concept Aceman wears a reduced exterior and interior design, says MINI, used on a two-box exterior shape that is familiar throughout the existing MINI product range.

The Concept Aceman is a fully electric crossover concept that measures 4.05 metres long, 1.99 metres wide and 1.59 metres tall, and wears design cues such as the prominently contoured wheelarches, 20-inch wheels, a roof rack and front and rear panels that imply underside protection for off-road use.

MINI calls this design language “Charismatic Simplicity,” combined what it calls a digital space experience with a cabin that is completely free of leather or chrome. Inside, knitted recycled textile is used where they contrast with seamless digital controls while a new OLED display takes centrestage.

The user experience for the Concept Aceman employs the car’s headlamps, radiator grille element, central interface and light projections to orchestrate a light show when a person approaches the car, and the lights become brighter as they get closer to the vehicle.

Unlocking the vehicle triggers a Union Jack graphic from matrix LEDs within the grille, while those within the right-hand-side headlamp offers a ‘wink’. The light show is accompanied by a sound sequence – dubbed an earcon – of four tones, intended to represent each letter in the MINI name, and the lighting sequence continues inside.

Opening a door will see a colourful image projected unto the floor, while at the same time a radial burst of colour is shown on the central interface’s round display. The text “hey friend” appears on the display, while an audio sequence of overlapping chattering voices and music imply an upbeat gathering.

Seating in the Concept Aceman employs “discreet geometry” with integrated headrests, and the seat surfaces offer a 3D-look through the use of textile flat knit, velvet velour and waffle weave, an over-dimensional houndstooth pattern and embroidered ‘X’ and ‘O’ graphics.

In terms of cabin hardware, the controls for the transmission selector and parking brake are relocated to free up more space between the driver and front passenger seats, where a flexible centre console resides and which can extend towards the rear of the cabin. This console offers storage, wireless charging, cupholders and other uses, says MINI.

The steering wheel, like other interior components of the Concept Aceman, is completely free of chrome and leather, and this is trimmed in dark green velvet velour while its multifunction buttons are underneath backlit textile surfaces.

The MINI Concept Aceman will have its first public showing at Gamescom 2022 in Cologne, which will be the world’s largest gaming event on August 23.