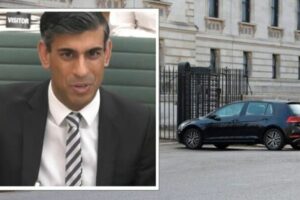 The beleaguered Chancellor came under increasing pressure after sources revealed his four-car fleet just days after he told MPs his family drive an ageing VW Golf.

Mr Sunak also borrowed a £12,000 Kia Rio for a photo-op of him filling up at Sainsbury’s in order to publicise the 5p cut in fuel duty that he announced last week.

But the sources claim he actually owns several high-end vehicles including a BMW and a top of the range Lexus.

Those cars are said to be kept at the family’s home in Santa Monica, California.

And that’s aside from a Range Rover which is used at his constituency home in North Yorkshire, according to the Mirror.

Mr Sunak used £30.01 of his own cash to fill up the Kia for the ill-fated publicity shoot at a Sainsbury’s last week but later admitted the car belonged to a supermarket employee.

As MPs questioned the Chancellor over his mini-Budget, which has been accused of failing to provide enough support for struggling families, Mr Sunak told MPs he has a 2019 VW Golf.

Treasury select committee member Siobhan McDonagh had asked whether his family had a Kia Rio, to which he replied: “We have a Golf”.

The Labour MP then asked if he regularly filled up other people’s cars. “Actually was an employee at Sainsbury’s,” Mr Sunak said.

However over the past few days it has become clear the petrol stations are not passing the 5p per litre cut on to motorists.

The average price of a litre of petrol at UK forecourts has fallen by just 3.7p per litre, figures from data firm Experian Catalist showed.

RAC spokesman Rod Dennis said drivers will be disappointed that prices have failed to come down further since last week’s fuel duty cut.

He added: “As duty is charged on the wholesale cost of fuel, it’s the case that some retailers will be waiting for new deliveries in order to buy fuel in at the cheaper rate – meaning drivers will have to wait to see the benefit at the pumps.

“What happens to the oil price, and in turn wholesale costs, in the coming days will be crucial. If prices rise, there’s a risk the fuel duty cut will be cancelled out as retailers face higher costs.”

Mr Sunak has refused to commit to more support in the Autumn when the cost of living is expected to rise even further.

He said he would “act if necessary” on energy bills this autumn and blamed “global forces” for the current crisis.

“He is out of touch and out of ideas, and it’s families that are paying the price.”

Mr Sunak’s spokeswoman declined to comment on the story.