Mercury Muscle Cars Through the Years 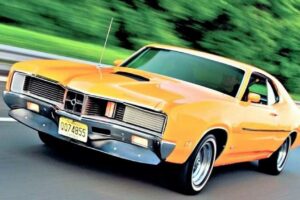 Ford’s middle child has an interesting history with the hot rod world.

When Mercury was created in 1938 by Edsel Ford, it was to ostensibly bridge the large price gap between Ford and luxury brand Lincoln. In keeping with the practice at Chrysler (which encompassed four brands) and General Motors (which had seven nameplates), Ford’s new upscale Mercury division would service upwardly mobile buyers with higher trim levels, more interior space, and more potent performance.

Related:How the 1967 Mercury Cougar Was Born In Ford’s Styling Studios

In future years, Ford’s Mercury division would earn a solid performance reputation that would follow the brand nearly to its demise in 2011.

What really gave Mercury its first big push onto the performance stage was a radical new pontoon body design for 1949, which it shared largely unchanged with Ford and Lincoln. The radical streamlined teardrop shape was a major departure in the postwar era from the cars that had been produced prior to and during the war, and sales of Mercury cars increased by a factor of six. Mechanically, the stage was set for performance with a higher-output version of Ford’s flathead V-8, optional overdrive, independent front suspension, ladder frame, and semi-elliptical leaf spring live rear axle. Hot rodders would adopt the 1949-1951 Mercury as a definitive hot rod type, bestowing the name “lead sled” (also spelled as “led sled”).

While the fresh look and added performance of the 1949-1951 Mercury Eight was a boon to hot rodders of the era (for more on Matthew Fox’s 1950 Mercury pictured above, click here), competition from medium-priced nameplates was heating up, and the 1950s saw the rise of the overhead valve small-block V-8 in the 1955-1957 “tri-five” Chevrolet, not to mention the debut of the overhead-valve Oldsmobile Rocket 88 and a trio of Hemi-powered brands from Chrysler (Chrysler, Dodge, and DeSoto). Performance was heating up and to stay competitive, Mercury would help bring performance to a boil once again in the 1960s with the muscle-car movement.

While the muscle-car movement is commonly associated with Pontiac’s release of the mid-sized GTO in 1964, full-sized performers were already in vogue by the early 1960s with cars like the Chevy Impala SS and Ford Galaxie 500. In this environment, Mercury produced what is arguably one of the best-looking full-sized hardtops of all time in the 1963 Mercury Marauder. Equipped with 390ci big-block power, the Marauder had the strength, the looks, and the name that evoked the mighty Martin B-26 Marauder bomber of World War II. In the highly competitive sales environment of the 1960s, each year brought new engineering and styling changes, and the one-year-only lines of the 1963 Mercury Marauder made true believers out of many, including us.

If the 1963 Mercury Marauder is a sleek missile, then the 1964 Marauder takes that ethos to the next level, as seen above in Tom Johnson’s full-size Merc. The folded-crease grille splits the air, spilling it over mile-long knife-edged stainless-steel moldings, past sleek-sided flanks and around an aggressively raked C-pillar. You can imagine how a NASCAR pilot might feel as he fights the wind that’s pressing the car into the pavement at 150 mph on the high banks of Daytona or Darlington. The addition of a teardrop Thunderbolt hood is a reference to Ford’s NHRA Super Stock effort and the 385-series Ford 460 under it pays tribute to Ford’s later success in stock car racing and drag racing, but the pleasurable mash-up just shows you how willing and flexible the lines of the full-sized 1964 Mercury Marauder really are!

At the opposite end of the size spectrum at Mercury was the Comet, a compact car based on the Ford Falcon platform. While the Mercury Comet got its start in 1960, it was the restyle in 1964 that put it on the map with hot rodders. It remained little changed in 1965 before the mark was transitioned to the mid-sized Fairlane platform in 1966. This 1964 Mercury Comet 202 belongs to Don Watson, who ordered it with a high-performance 289ci small-block—an option that was not technically available from the factory! Fortunately, the dealership had an ally within the plant, and it was built to order. The Comet line-up in 1965 consisted of the 202, the 404, the Caliente, and top-of-the-line Cyclone, making this one rare performer.

The Mercury Cyclone trim level first hit the scene in 1964 as the top-line Comet model and was built on the compact Ford Falcon platform. By 1966, the Comet had moved up from a compact to an intermediate and was built on Ford’s mid-sized Fairlane platform. At this size, it became competitive with a raft of GM and Chrysler intermediates in both stock car racing and drag racing. On the streets, the 1969 Mercury Cyclone Cobra Jet was envisioned as a low-cost competitor to the Road Runner, its 335hp 428ci Cobra Jet FE, Drag Pack package, and no-frills trim level putting it squarely in the crosshairs of young enthusiasts of the time. It was a relatively rare machine despite its price, making it highly prized today. Check out Larry Chernow’s fine example.

As the decade of the 1960s wound down, Detroit’s full-sized performers started taking a back seat to lighter intermediates and newer ponycars. This didn’t keep them down, it only changed the intended buyer to an older, more sophisticated (and hopefully wealthier!) customer. After a three-year hiatus, the Marauder nameplate was back for 1969 and 1970, and shared its platform and roofline with the full-sized Ford XL and Galaxie 500 SportsRoof. The Marauder X-100 was the ultimate in the personal luxury performance segment, sharing the same territory as the Chrysler Hurst 300 and Chevrolet Impala SS; large and in charge was the rule with Mercury’s newest luxury performer, thanks to a 360hp 429ci big-block V8 and miles of gleaming steel and chrome.

The Cougar was Mercury’s answer to the Ford Mustang, but didn’t see production until 1967, three years after the Mustang hit showrooms. Nobody had any idea how successful the Mustang would be, and when it became apparent that Mercury needed a ponycar in its showrooms plenty of water had passed under the bridge. As a result, the Cougar had a look all its own; slightly larger, longer, and more formal with its upright greenhouse and hideaway headlights, it was a true step up from the Mustang with a look and feel all its own, but with virtually identical powertrain options. By 1969, the Cougar was available in Eliminator trim level, right up to a 428ci Super Cobra Jet big-block. Jay Williams’ black-on-black 1970 Cougar Eliminator is so rare, most historians wrote it off as a fake, until documentation proved otherwise!

The first time you lay eyes on a 1970-to-1972 Mercury Cyclone, you almost don’t think it’s real on account of its long snout. This isn’t a car for the faint of heart! The Cyclone had earned its reputation on the tracks of NASCAR, mostly at the hands of David Pearson while behind the wheel of the Wood Brothers Purolator-sponsored number 21. In the hands of a drag racer like Vic Guilmino, who owns this 1970 Mercury Cyclone 429ci Super Cobra Jet, the big Cyclone looks positively menacing with its big ‘n’ littles on Cragar SS mags. Guilmino is the original owner and after drag racing it several years in Stock Eliminator, put it back on the road after the NHRA told him he had to cut the car up for a rollcage in order to keep racing.

When the muscle car craze faded in the early 1970s, Mercury was one of its casualties; what had been muscular was now fat and flabby, if it survived at all. Mercury fans would have to wait until Ford devised the downsized Fox-body platform in 1979 before a semblance of performance would return to the brand. On that platform, Mercury would receive a wellspring of new products including the Zephyr, Marquis, Cougar, and Capri. Of those, the 1979-1986 Capri was the most performance-oriented of the group and could be equipped with the same powertrain goodies as the more popular Ford Mustang GT. The Capri, however, continued Mercury’s practice of visual differentiation with a vertical egg-crate style grille (the Mustang’s was sloped back) and a bubble-shaped back-glass (the Mustang’s hatchback was flat). See what John Puckett did with his bitchin’ 1983 Capri at HOT ROD’s Drag Week.

When the last Mercury rolled off the assembly line on January 4, 2011, it would be a Grand Marquis, built on the same Panther platform as the Ford Crown Victoria. The body-on-frame Panther platform had been around since 1978 and had provided the basis for not only family transportation, but rental fleets, taxi services, and law enforcement agencies everywhere. The Panther, and so too the Mercury Grand Marquis, had proven nearly indestructible in those roles, so product planners wondered, could it also be a cool hot rod? For two model years—2003 and 2004—the Panther platform would provide the basis for Mercury’s last high-performance hurrah: a curtain-call for the Mercury Marauder. Loaded with all the cop-car goodies plus a 305hp 4.6-liter DOHC Mod V-8, the last Marauders were the answer to Chevy’s 1994-1996 Impala SS. See how Sherman Vining turnedhis 2003 Mercury Marauder into a 10-second terror.

In this 2019 edition of the Muscle Monday video series, host Kendra Sommer introduces us toBarry Jadin, who takes us through the build and details of his fully restored 1970 Mercury Cougar Eliminator. “If you’re gonna do a restoration of a car, it should be restored to the way it was—the way it looked coming out of the factory,” Jadin says.