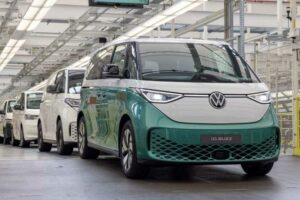 Last week, the European Commission voted to uphold the proposed ban on sales of new passenger cars with internal combustion engines in the European Union starting from 2035. The new law – still subject to discussions between member states later this year – provoked reactions from Europe’s largest economies with Germany and France saying the plan is too ambitious and costly and will have a great negative impact on the industry. However, two of the largest automakers on the continent, Mercedes-Benz and Volkswagen, declared they believe the plan is achievable.

The Wolfsburg-based manufacturer was the first to react by expressing its support for the ICE ban from the middle of the next decade. The European Union’s decarbonization strategy is “ambitious but achievable,” said Volkswagen, adding that the shift towards electric mobility is “irreversible.” VW also added that “it is the only ecologically, technologically and economically sensible way to replace combustion engines as quickly as possible,” quoted by Automotive News.

Voices from Stuttgart where Mercedes is headquartered also came in support of the proposed ban on sales of new cars with combustion engines under the hood. Not only that but the automaker also said it could achieve this goal earlier than the new law mandates. “By 2030, we are ready to go fully electric wherever market conditions allow,” Eckart von Klaeden, head of external relations at Mercedes, told the German Press Agency (DPA). “The decision puts the onus on policymakers to ensure the necessary infrastructure is in place.”

Volkswagen and Mercedes are not the only automakers backing the ban. Ford, Stellantis, and Jaguar are among the companies that generally support the end of the internal combustion engine in Europe from 2035. Before the new law is finalized and approved, though, it has to be signed by all 27 EU nations. With large economies like Germany, France, and Italy against the law in its current form, this could prove to be a very difficult task.