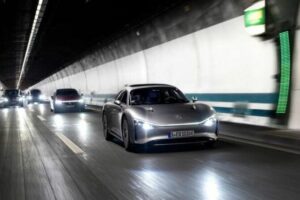 Mercedes-Benz introduces their vision for the EQXX

The all-electric one-off Mercedes Vision EQXX concept drove for the first time last week as it left the HQ near Stuttgart. It then journeyed across the Swiss Alps and through Northern Italy without a single charging stop, before arriving on the Côte d’Azur just over 12 hours later.

Incredibly, data showed that the EQXX still had around 140km (87 miles) of range left in its battery.

It was among the longest distances ever covered by an electric vehicle on a single charge.

The sleek-looking vehicle travelled at an average speed of 54 mph over the route and the charging compartment was sealed closed.

Mercedes first introduced the Vision EQXX at a show in Las Vegas earlier this year, primarily as an experiment in battery efficiency.

But performance and interest has been so impressive that it’s likely to form the basis of an EV to go up against the likes of Porsche’s Taycan.

Mercedes originally thought that the Vision EQXX will consume energy at a rate of 10kWh per 100 kilometers, or more than six miles per kWh.

But in real-world conditions and on busy roads, it beat that by some distance.

The wide range of temperatures during the journey, from cold mountain air to more warmer conditions, helped show off the Vision EQXX’s performance in a variety of settings.

But the vehicle did not encounter snow or any freezing conditions, which has been known to quickly drain the energy from an EV battery.

Mercedes engineers were able to monitor the car remotely and when it encountered a minor power issue, they quickly fixed it from hundreds of miles away.

The roof of the EQXX also features 117 solar cells that achieve 20 percent efficiency, and can add 16 miles of range over the course.

The electric motor in the car sends 241bhp to the rear wheels and has an average efficiency of 95 percent.

Combined with the battery it barely generates any waste heat, meaning vents stay closed and drag is kept to an absolute minimum.

Although it clearly has the potential to extend well beyond it, the top speed is currently limited to just 87mph.

There are also four levels of regenerative braking, activated via steering wheel-mounted paddles.

As to how long it is before the EQXX, or something similar hits the roads, Mercedes’ Chief Technology Officer Markus Schäfe said: “I would say stay tuned.

“In the near future you will see something which is – from a design standpoint – very very close to this vehicle.”

“It was kind of surprising the interest it was sparking.

“With that kind of positive feedback, when it comes to the design language of the car, that’s definitely something we’re going to pick up on.”