Home » Mercedes-EQ EQT Van on the Way to Join eSprinter, eVito in Europe

Mercedes-EQ EQT Van on the Way to Join eSprinter, eVito in Europe 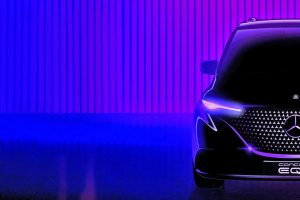 Mercedes-Benz Vans’ lineup in Europe is a little bit confusing, and since we only get the Sprinter and the Metris on these shores we’ll spare you a detailed examination of how the new T-Class partially replaces the current Citan. So here’s what you need to know: There is a T-Class there, a joint-venture with Renault and related to the Kangoo small commercial van, and this new Concept EQT previews an electric Mercedes-EQ EQT version of said T-Class.

To put it another way, think of the T-Class as being roughly the same size and shape as a Ram ProMaster City or Ford Transit Connect. Now, electrify that and put a Mercedes tri-star on it, and you’re in the right headspace.

The Mercedes-EQ lineup is getting serious now. We just saw the flagship EQS luxury sedan (in the gallery below) and the EQB small SUV, and the EQC midsize SUV is a solid first shot at a full-bore EV from the company. And Mercedes-EQ ain’t done yet, with the EQA compact SUV on the way, too. And Mercedes-Benz Vans isn’t going to let the EQT roam the streets alone, as Mercedes already sells the eVito and eSprinter vans in Europe.

Not that this is exactly a pure work van. Mercedes-Benz Vans is using the T-Class (and EQT) to target non-commercial customers with small, utilitarian, and upscale vans. What, exactly, that’ll look like in EQT form remains to be seen, but it sounds like the company is targeting “active lifestyle” customers who want a well-appointed and luxurious vehicle or camper.

The EQT Concept will debut on May 10, and the production version should arrive sooner rather than later. After all, the related 2021 Renault Kangoo is already on sale, and that includes its ZE electric version, so a production EQT can’t be too far off.