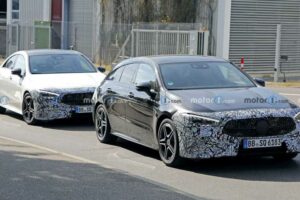 Mercedes-Benz is busy working on a refresh for its small car family and we’ve seen many prototypes of the A-Class, B-Class, GLA, and GLB testing with camouflage in different states of development. Now it’s time to take a look at the CLA family with new spy shots of the swoopy sedan and the more practical Shooting Brake alternative.

The two trial cars you see depicted in the attached gallery below were recently snapped while being evaluated in Germany. The amount of disguise on both vehicles is minimal suggesting only minor visual tweaks. It’s also interesting to note that both CLAs were equipped with the AMG design package.

At the front, it seems that there could be tweaks to the headlights graphics as well as a redesigned bumper. The radiator grille is also concealed not allowing us to see its design, though we don’t expect big changes in that regard. Just like with the current model, the CLA and CLA Shooting Brake will have different grilles depending on the trim level.

The situation is similar at the back – the disguise is minimal and covers the taillights and the area between the lighting clusters. Even though the LED graphics of the taillights appear to be identical to the current model, there might be a few changes to keep the overall design at the back fresh. No tweaks to the bumper or lower diffuser are visible from these photos.

No big changes are planned under the hood, too. We expect Mercedes to keep offering the CLA family with a turbocharged 2.0-liter inline-four engine mated to a seven-speed dual-clutch transmission. The CLA 35 and CLA 45 AMG models will also likely carry over without significant mechanical changes. On the tech side, the CLA family could be upgraded with the latest applicable version of the automaker’s infotainment system.

Seeing how lightly camouflaged these prototypes are, we expect to see the refreshed CLA range – together with the rest of the brand’s small car models – towards the end of the year. Those that are planned to be sold in the United States will likely arrive in America as 2023 models.