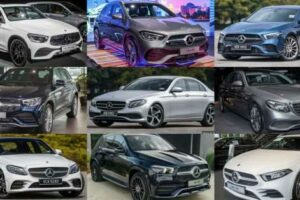 Mercedes-Benz Malaysia (MBM) has introduced a new digital showroom, and what’s unique about it is that it provides an actual stock count of models and variants on hand, making it easy for potential customers to ascertain if the particular model that they’re eyeing is available for purchase.

The count is dynamic, with inventory being updated on what looks to be a daily basis, as shown from perusing the site yesterday and again today. For example, there were 30 units of the W177 and V177 A-Class listed as on sale yesterday, while it’s 29 cars today.

Currently, the bulk of the listings are for the sedan, with 20 units of the A 35 Sedan and a solitary A 250 Sedan AMG Line available. Those looking at the hatchback have only the two AMG models, the A 45 S (six units) – initially offered in Edition 1 form and then updated in March this year – and the A 35 (three units) to pick from.

Although there are currently no civilian W177s available for sale, this should eventually change – earlier this year, MBM confirmed plans of introducing locally-assembled compact car models, and the A-Class should be at the top of that list, although when that will come about is anyone’s guess. Word on the grapevine says that deployment plans have been delayed by the Covid-19 pandemic.

As for the locally-assembled W205 C-Class, there are presently 69 units listed, and all are C 300 AMG Line facelifts with the Sports suspension. One unit has moved since yesterday, when the tally was 70 units. Those looking for a C 200 AMG Line are out of luck, because none are in sight.

While the W213 E-Class facelift‘s debut is right around the corner, there’s still run-out stock of the pre-facelift to the tune of 33 units, consisting primarily of the E 300 Exclusive Line variant (20 units). There are also four E 350 and nine E 200 Sportstyle Avantgarde. The total E-Class count was 34 units yesterday, and the unit off the list is an E 200.

Next, the H247 GLA, which was introduced in Malaysia last December. Only five units of the fully-imported SUV are listed, all GLA 250 AMG Line versions, so it looks like GLA 200 stocks have depleted.

Moving on, we get to the GLC SUV and Coupe, and there are quite a few of these, with 60 listings in all, down three from the 63 records in place yesterday (as seen in the screen cap image above). Most are of the X253 GLC 300 4Matic, with the site having a current count of 38 units (41 yesterday).

Lastly, the site has inventory of the V167 GLE, which was introduced in CKD form in May this year. There were initially 24 listings of the GLE 450 4Matic AMG Line, but today’s count is down to 20. If anyone is on the lookout for a new C167 GLE Coupe, looks like you’re out of luck, because none are shown on the site.

There are quite a few models missing from the digital showroom line-up. Whether these are as a result of stock exhaustion or being dropped from the line-up isn’t ascertained, but notable absentees include the C118 CLA, of which only one variant was introduced here. This is the C 45 S. The model was updated in March this year, but now looks to be sold out.

Conveniently, the individual showroom listings are tied to dealerships offering the stock, so it makes it easier for customers shopping for a particular model or variant to see if an outlet near them has the model they want. Dealerships that are present in the digital showroom are Hap Seng Star, Cycle & Carriage Bintang, NZ Wheels, Minsoon Credit, BR Jaya and N.A. Classic.