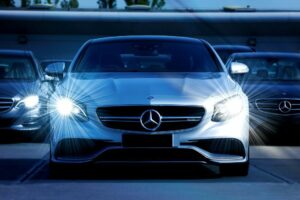 Mercedes-Benz introduces their vision for the EQXX

The German car giant announced yesterday that it has issued an immediate global recall of the cars because of problems with the brake booster on three different series. It has told any owners of the affected cars not to drive them until having an inspection carried out.

The ML and GL cars are SUVs, while the R-Class is a minivan.

Mercedes-Benz said in a statement: “We have found that in some of those vehicles, the function of the brake booster could be affected by advanced corrosion in the joint area of the housing.”

This could result in an increase in the brake pedal force needed to decelerate the vehicle and/or to a potentially increased stopping distance, it added.

However, it is not known exactly how many vehicles in the UK are affected.

Germany’s federal transport authority (KBA) said that: “Corrosion on the brake booster can in the worst case lead to the connection between the brake pedal and the braking system being interrupted.

“As a consequence, the service brake can stop functioning.”

Mercedes-Benz stated the move was based on “analysis of isolated reports for certain vehicles”.

They continued: “In rare cases of very severe corrosion, it might be possible for a particularly strong or hard braking manoeuvre to cause mechanical damage to the brake booster, whereby the connection between brake pedal and brake system would fail.

“In such a very rare case, it would not be possible to decelerate the vehicle via the service brake.

“Thus, the risk of a crash or injury would be increased.”

The company said it would immediately contact the owners of the “potentially affected vehicles”.

“The recall process will involve inspecting potentially affected vehicles and, depending on the results of the inspection, replacing the parts where necessary,” the Stuttgart-based company said.

They added: “Until the inspection takes place, we ask our customers not to drive their vehicles.”

It comes two weeks after A Mercedes-Benz 300 SLR became the most expensive car ever sold.

The 1955 Mercedes-Benz 300 SLR Uhlenhaut Coupé is only one of two such versions in existence and was auctioned off earlier this month.

Auction house RM Sotheby’s announced that the classic car had sold for £114.4million – equivalent to €135million and $143million.

The buyer, who has chosen to remain private, had the winning bid placed on their behalf by Simon Kidston, head of historic car specialist Kidston SA.

The £114.4million car is a new world record for any car, more than doubling the previous record.

Just two of the 300 SLR Uhlenhaut Coupés were ever manufactured by Mercedes-Benz, which were named after the firm’s chief engineer, Rudolf Uhlenhaut.