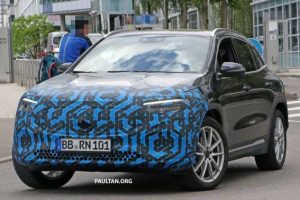 Mercedes-Benz was due to expand its EQ range of electric models at the end of the year with the unveiling of the EQA compact SUV. However, a new report from Autocar suggests that the car will be delayed for around six months due to various complications.

The factors listed by the British publication include battery cell supply difficulties as well as disruptions brought about by the coronavirus pandemic. But a late switch in where the larger, boxier EQB will be built is also reported to be blamed for the postponement.

Production was originally due to commence in Hambach, France, in place of the outgoing smart fortwo. However, Daimler is now in talks to sell the plant to chemicals company Ineos, which could build its Grenadier 4×4 there. As such, the EQB will apparently be moved to Rastatt, Germany, where the EQA is already slated to be built. This has put paid to Stuttgart’s plans of introducing the EQA this year, said Autocar. The development of the EQA was already complicated as is. It was previewed in 2018 as an A-Class-sized three-door hatchback, but last year, Mercedes confirmed that it would instead take the form of a small crossover, sharing its bones and much of its components with the new GLA.

At least the car will (eventually) grow some fangs to make up for the wait. That’s because the same report states that Mercedes-AMG is building a performance version of the EQA. Word is that an Affalterbach two-motor all-wheel-drive model with an uprated rear motor will provide comparable performance to a GLA 45. As for the cooking EQA, expect it to come in single- and dual-motor variants.