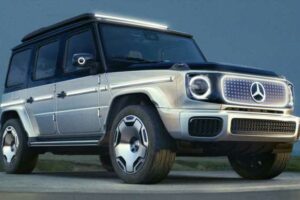 Mercedes is one step closer to making good on its promise to offer an electric G-Class, as the German automaker pulled the wraps off of the Concept EQG at the Munich Auto Show in Germany. Although technically a concept car, Mercedes even calls the Concept EQG a “near-production study. “

Further driving home this point is the concept’s use of the gas-powered G’s bodywork. Yes, there are styling changes, but many of the G’s major body panels appear to carry over unchanged to the Concept EQG.

That said, the Concept EQG manages to stand apart from its G-Class kin by way of a number of concept-specific details. Notably, the boxy EV trades the grille of the gas G-Class for a black panel with an illuminated three-pointed star that’s complemented by animated blue squircles and a wraparound light band.

Mercedes didn’t stop there, though, as it fits the Concept EQG with even more light-up exterior decor. This includes the protective strips that run across the SUV’s body sides, exterior mirror housings (with integrated illuminated circles designed to mimic the look of the G’s headlights), and the rear box that hangs off the tailgate.

Note we use the term “box” and not “spare tire cover”. This is because the Concept EQG forgoes the gas model’s rear-mounted spare tire and wheel and instead welcomes a small cargo box in its place. Mercedes envisions EQG buyers storing the vehicle’s charge cord in this space. Other visual enhancements to the Concept EQG include a two-tone paint scheme, a special set of 22-inch wheels, and a roof rack with integrated white and red LED strips at the front and rear, respectively.

While Mercedes is mum on details related to the Concept EQG’s interior differences, battery capacity, and driving range, the automaker is willing to share some details about the SUV’s basic drivetrain, which includes a total of four electric motors—one for each wheel. To ensure the Concept EQG maintains the off-road credibility of Geländewagens before it, Mercedes fits the concept with a two-speed gearbox (presumably this means each motor includes two gearsets) and allows the driver to control each motor individually. How much power these motors make, however, remains under wraps. As on the gas G-Class, the Concept EQG features an independent front suspension system and a live rear axle.

Until Mercedes shares more details about the Concept EQG’s—or the production EQG’s—battery pack, weight, and power output, we’ll have to take the brand’s word that this electric SUV is a worthy addition to the G-Wagen family. Nevertheless, the Concept EQG certainly offers the looks of a tried-and-true Geländewagen. We’ll just have to cross our fingers and hope this electric SUV also packs the performance and capability expected of the famed off-roader.