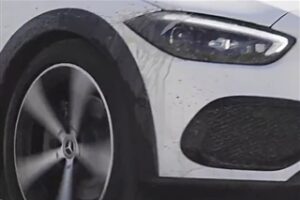 Mercedes-Benz is slowly but surely expanding the W206 C-Class lineup, with the sedan and the S206 wagon already revealed. The company has confirmed that a brand new variant, the All-Terrain, will be the next to be revealed, with the covers due to be pulled off the car tomorrow.

This will mark the first time the All-Terrain badge finds its way to the C-Class, having made its debut on the current E-Class. Essentially, the longroof model will receive a raised ride height, black protective body cladding and skid plates to give it a quasi-SUV look and a modicum of off-road capability.

Spy photographer Wilco Blok has already posted some screenshots of a reveal video on Instagram, showing these additions on the C-Class Estate body, together with some snazzy five-spoke two-tone alloys. Expect 4Matic all-wheel drive to be fitted as standard.

The company has also confirmed several other model debuts planned next month ahead of the Munich Motor Show. The first of these will be a Mercedes-AMG plug-in hybrid model under the new E Performance banner, and while its exact identity has not been made known, it will likely be the GT 73, coming nearly three months after the facelifted GT 4-Door Coupé.

The new range-topping model is expected to pair the ubiquitous M177 4.0 litre twin-turbo V8 with a new P3 plug-in hybrid system. The latter will reportedly add an extra 204 PS and 363 Nm to deliver a total system output of at least 800 PS and over 1,000 Nm. The production AMG One hypercar should also make an appearance, given that customer deliveries are finally slated to kick off later this year.

Following these models will be a whole slew of cars on September 5, including the fully-electric EQE. The smaller sibling to the EQS will feature much of the same technologies, including the full-width Hyperscreen display. It will also be built on the same Electric Vehicle Architecture (EVA).

The AMG and Mercedes-Maybach sub-brands are also expected to enter a new era of electrification on the same day, both showing their versions of EQ vehicles. The former has been seen testing a fettled EQS that is rumoured to be powered with at least one motor on each axle, pushing out an astonishing 761 PS; it’s likely that this is the car that will be making its world premiere in Munich.

Meanwhile, Maybach will present a concept version of the EQS SUV, having already teased it last month. The luxurious show car will preview the flagship electric crossover, due to be revealed sometime next year together with the EQE SUV. Last but not least, smart will unveil a concept electric SUV that will preview a production model coming further down the line, developed in partnership with Geely.