Mercedes-Benz Announces Pricing for the EQS-Class SUV, Its American-Made EV 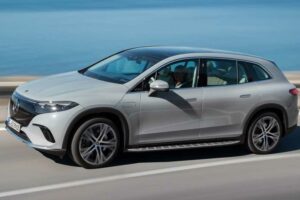 The first of Mercedes’ all-electric EQ lineup to be built in the U.S., the EQS SUV is poised to be one of the most technologically advanced seven-passenger SUVs in its lineup. It’s also one that’s accidentally rather good for off-roading as we got to see in our first drive of a camouflage example of the 580 4Matic. Now, the German luxury brand gave us a look at its price and, unsurprisingly, it’s not going to come cheap. The EQS starting price is just over $26,000 more than the starting price of Mercedes’ other seven passenger SUV, the GLS.

The 2023 Mercedes EQS SUV comes in three different versions that kind of denote their power, drive, and range. By “kind of,” we mean the numbers don’t directly correlate with any of them, even when you apply the metric power measurement. For example, the starting point of the EQS is the 450+, which comes in at 356 hp with its single motor and has a range of 305 miles. Then we come to the 450 4Matic, which has the same total power output, but does it with dual motors for its AWD powertrain (so, the “4Matic” makes sense) and 285 miles of range. Finally, we have the “big boy” of the EQS family with the 580 4Matic with its dual motor AWD pumping out 536 hp total, but with the same range as the 450 4Matic, 285 miles. Yeah, we know, Mercedes has a recent history with this on their ICE-powered models, but it seems its EV lineup has made these numbers even less equitable to anything related to its powertrain. Fortunately for you, dear readers, this story isn’t about that rant but its pricing instead.

Which is something that will come to shock those (pun not intended) accustomed to ICE pricing. As mentioned at the start, the base price for the EQS 450+ Premium SUV is $105,550, that’s $26,650 more than Mercedes’ other seven passenger SUV, the GLS. We’ll give you a second to clean up the drink you probably just spat out reading that number because it doesn’t get much better after that. The starting price of the 450 4Matic Premium is $108,550 while the 580 4Matic Premium isn’t expected to go out the door for no less than $127,100. The “Premium” is the lowest trim level you can buy the EQS SUV and it includes a driver assistance package, heated & ventilated front seats, leather upholstery, power tilt and sliding panorama roof, 20-inch wheels, Burmester 3D sound system with Sound Personalization and Dolby Atmos, 10-Degree rear axle steering, 64-color ambient lighting, and a parking assist package with a surround view system. The 580 4Matic has the 56-inch curved MBUX Hyperscreen and 21-inch wheels as standard equipment where the 450+ and 450 4Matic  get 20-inch wheels and a 12.8-inch OLED portrait display.

Next up is the Exclusive trim which comes with everything from the Premium trim plus a HUD, rapid heating front seats, MBUX Assistant for the front passengers, front multicontour seats with massage, a quad zone climate control, Mercedes’ Air Balance air purification package, and Mercedes-Benz star logo projectors. The 450+ Exclusive starts at $108,550, the 450 4Matic at $112,800, and the 580 4Matic at $114,800.

The final trim level for the EQS SUV is the Pinnacle, which is the Exclusive trim with the addition of the Executive second row seat package that gives the second row ventilated and massaging seats, headrest pillows, a middle armrest with wireless charging, and the MBUX rear tablet. The prices are eye-watering at $127,100 for the 450+, $131,350 for the 450 4Matic, and $133,350 for the 580 4Matic.

How Does Its Price Compare to the Model X, iX, and R1S?

Remember, those prices are just the start of each trim’s MSRP. Though, looking at its rivals, the Tesla Model X and the BMW iX XDrive50, the base price is right down the middle of the two with the Model X starting at $134,190 and the iX starting at $85,095. Even when looking at the premium versions of the Tesla Model X and BMW iX, the X Plaid is $145,690 and the iX M60 is $109,720. However, as you add in options that are available to the EQS SUV beyond the packaged trim items, you can end up with an EV that costs north of $140,000.

Compared to the Model X Plaid, it’s still a bit of a bargain (unless you value the “wow” factor of the Plaid’s acceleration) in the battle of seven-seater versus seven-seater. And while it looks like it’s overpriced when compared to the iX, we must point out that the BMW isn’t even a seven passenger vehicle. The only other real rival to the EQS SUV would probably be the Rivian R1S, which will come in at $79,075 but can be priced as high as $99,075 with nearly all of the off-road chops of the R1T, 835 hp from its four-motor AWD system, and 316 miles of range. That’s what makes you start to wonder where the true value lies: is it the established luxury SUV brand that’s new to EVs or the upstart EV company with the lower-priced vehicle?