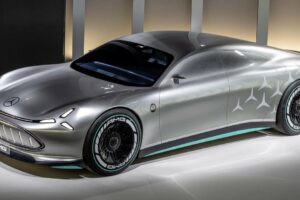 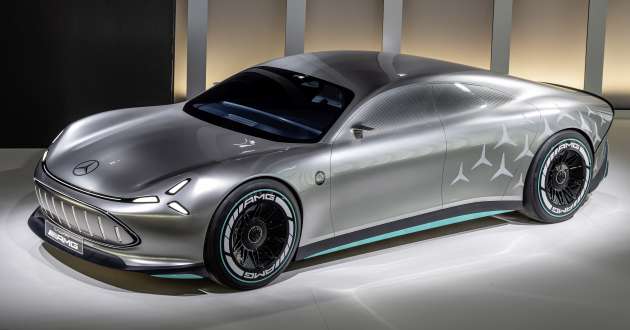 Mercedes-AMG has unveiled the Vision AMG concept, which is built on the manufacturer’s pure EV-dedicated AMG.EA platform and is a design study aimed at showcasing the German marque’s direction as it enters its future of fully electric models.

The Vision AMG represents “what electrification could look like at Mercedes-AMG,” said the manufacturer, which features future design elements such as light signatures and its illuminated grille as an evolution of its Sensual Purity design language, said Mercedes-Benz Group chief design officer Gordon Wagener.

Visual cues on the Vision AMG offer a hat tip to the marque’s current internal combustion-powered models with its vertical bars on its closed-off fascia that hint at the Panamericana grille, where the tristar takes pride of place among the illuminated vertical bars.

Lighting comes courtesy of a three-LED assembly for each headlamp, arranged to be a stylised Mercedes-Benz three-pointed star and which are joined a horizontal light bar across the fascia. This light bar can be configured to produce an animated welcome signature as well as constant light, among others, said Mercedes-Benz.

In profile, the 22-inch wheels can be seen to wear aerodynamic covers, while the bodywork is adorned with a large tristar pattern across the rear doors and quarter panels, while wearing an overall teardrop shape that also resembles that of the Vision EQXX concept that was revealed at the beginning of this year.

At the back, the sharp edge incorporates an active spoiler that improves airflow while also making the car appear longer. Framed within the rear fascia, above the diffuser is a sextet of lights. Here, the silver paint scheme and flashes of turquoise are a nod to Mercedes-AMG Petronas F1 team.

Announced in July 2021 alongside other Mercedes-Benz’s other fully electric platforms, models to be based on the AMG.EA platform will receive AMG-specific power units that will better reflect the AMG philosophy, the automaker said at the time.

Mercedes-Benz acquired British firm Yasa for this purpose, giving the German marque access to axial flux motor technology which will yield motors that will have superior power-to-weight figures, as well as providing endlessly repeatable performance and outstanding efficiency, it said.

According to Mercedes-Benz, the Vision AMG is a “taste of a functional all-electric sports car of the future” that offers spacious accommodation for four persons, and is a vehicle that sits lower than the EQS despite having its battery pack located within the floor between the front and rear axles.

“With this study, we are now offering a first glimpse of how we are transferring the AMG DNA into the all-electric future, starting in 2025. We’re developing everything from scratch, from the dedicated AMG.EA platform to the revolutionary drivetrain technology with which we will take performance electric mobility to a whole new level,” said Mercedes-AMG CEO Philipp Schiemer.