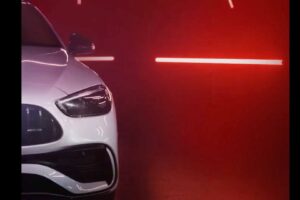 Mercedes-AMG has a new teaser showing the front corner of a sporty, new member of the C-Class family. The brief clip shows the start-up sequence where the headlights come on and level. Then, the lamps shut off.

Oddly, while there’s an audio option for the video, the clip is totally silent. This could be meaningless, but we wonder whether it might be a subtle hint. Rumors suggest that the new C-Class AMG models are adopting hybrid powertrains. Perhaps the lack of audio is a way to tease the upcoming vehicle’s ability to run without sound on electric power.

Judging by the little bit of the body we can see, this appears to be the replacement for the C 43 because the front fascia isn’t as aggressive as what we’d expect to see on the C 63. There are conflicting reports about this model’s name. Various stories claim that it remains the C 43, while others indicate the moniker is now the C 45 or C 53.

Regardless of the name, this new model reportedly boasts an electrically assisted 2.0-liter turbocharged four-cylinder. Without any hybridization, this mill makes 416 horsepower (310 kilowatts) and 369 pound-feet (500 Newton-meters) of torque in the CLA 45 S. 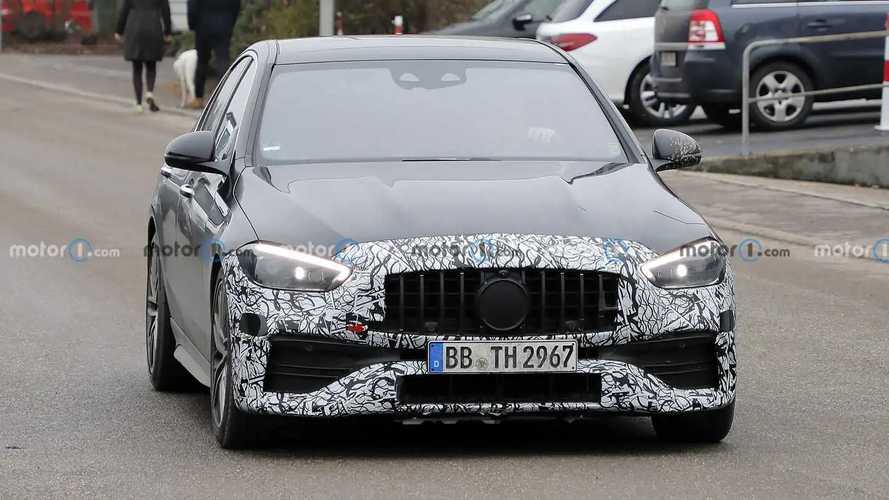 Drivetrain specifics aren’t available yet. Although, the current C 43 is only available with a nine-speed automatic and all-wheel drive. It wouldn’t be too surprising for the combination of an auto gearbox and AWD to carry over to the new vehicle, too.

Mercedes teaser only says more info is “coming soon.” If the company is willing to show the uncamouflaged vehicle, we wouldn’t expect too long of a wait to see the whole thing.

Following the arrival of this model, we know that the new C 63 is on the horizon. It also reportedly uses a 2.0-liter turbocharged four-cylinder. However, the turbo reportedly has an electric motor to spin it, similar to the new SL 43. There would also be another electric motor for turning an axle. The total output is reportedly as high as 600 hp (447 kW). Spy shots show both sedan and wagon variants on the way.