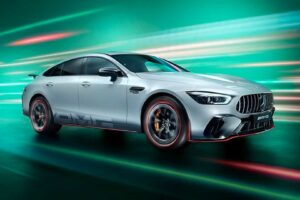 The Mercedes-AMG GT 63 S E Performance has only been out for a few months and it’s already getting a second special version. After the €218,674 Edition introduced at the beginning of February, you can now spend even more on the company’s most powerful production car (until the AMG One arrives). The F1 Edition costs €222,815 in Germany and takes the shape of an appearance package that adds €23,800 to the car’s base price of just under €200,000.

As the name of the version implies, it takes after F1 where the Mercedes-AMG Petronas Formula One Team is not exactly successful in 2022. What do you get for an optional appearance package priced about the same as a base Volkswagen T-Roc? For starters, those 21-inch forged wheels have a dual five-spoke design with a matte black finish and a red rim flange to echo the alloys used by the official FIA F1 Medical Car.

For your money’s worth, AMG throws in an aero package encompassing a bigger front splitter, extra air deflector elements, fixed rear aerofoil, and a tweaked diffuser. It’s more than just for show as these components have been developed in the wind tunnel to bring real benefits by sharpening up handling at high speeds while reducing drag.

Finished in a fancy Alpine Grey paint from the Manufaktur catalog, the AMG GT 63 S E Performance F1 Edition also gets an assortment of glossy black accents. These are included with not one, but two Night Packages, which give the badges a dark look also applied to the window surrounds and exhaust finishers. Mercedes has also blacked out the grille and some of the other exterior trim while the fuel filler cap has a silver chrome look.

Official images of the interior have not been provided by the peeps from Affalterbach, but we do know the Nappa leather seats come in black with red contrasting stitching. There’s more of that vibrant shade on the seatbelts, steering wheel, and carbon fiber trim. Rounding off the visual tweaks are unique floor mats and an exclusive Edition badge.

As a final upgrade, the PHEV monster with its 843 horsepower and 1,084 pound-feet (1,470 Newton-meters) of torque comes bundled with an AMG-branded indoor car cover adorned by the F1 logo.