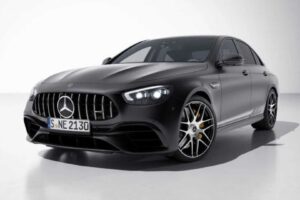 Mercedes-Benz is about to reveal a new-generation version of the GLC Class, which will arrive with mild hybrids and PHEVs – an inevitable direction in this era of electrification. But this isn’t the only new model that Mercedes fans should watch out for.

News about a new Mercedes-AMG E63 S Final Edition looms on the horizon as the GLC’s launch date nears, courtesy of Germany’s Mercedes Fans. And more importantly, an upcoming Final Edition will be the last of its kind – the final AMG E-Class sedan to be powered by a V8.

The rumor mill is telling us that the next W214 Mercedes E-Class won’t have the V8 powertrain in the lineup, even with the top-spec AMG models. This isn’t confirmed at this point, though. However, internal discussions have allegedly pulled the trigger on the eight-cylinder mills. If you’re in the market for a V8-powered AMG E63 S, then the Final Edition will be your last chance to buy one brand new.

Mercedes-Benz has yet to officially announce the AMG E63 S Final Edition, but we have preliminary details from those who are privy to the matter.

Outside, the AMG E63 S Final Edition will have a matte finish, carbon fiber parts, gray AMG foiling, and a set of 20-inch wheels. The cabin will likewise get carbon fiber finishes, as well as a performance steering wheel and seats with yellow contrast stitching. More details will be revealed at the official announcement, especially the pricing which will certainly be higher than the current top-spec E63 S model.

Last year, we discovered that the V8 has been pulled out of the Mercedes lineup due to quality issues. AMG boss Philipp Scheimerspoke otherwise, saying that the V8 will stick around for another 10 years – in various forms, anyway.