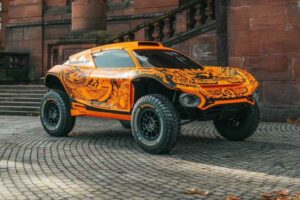 Will McLaren offer an SUV? That question has been asked repeatedly for the last few years but as of August 2022, the answer is inconclusive. Under the helm of former McLaren CEO Mike Flewitt, the response was no. Now, Michael Leiters is the boss of the UK-based supercar brand. And his take on the subject isn’t quite as firm.

Speaking recently to Autocar, Leiters openly admitted that he loves SUVs, seeing the segment as “attractive” and still growing. However, he also noted that the prospect of a McLaren SUV was still very much a subject of discussion at the company.

“I developed an SUV at Ferrari, I developed an SUV at Porsche, so I love SUVs,” said Leiters, according to Autocar. “But we won’t do it for me. Yet I think it’s a really important market. What we have to understand as McLaren is, ‘how can we find a product that is in line with our DNA?’. We shouldn’t do a classic SUV.”

There’s certainly a business case for offering some form of SUV or crossover. Leiters’ former company Porsche continues to see tremendous success with SUVs, with Cayenne and Macan sales far exceeding those of all other Porsche models combined in 2021. Lamborghini just celebrated its best half-year sales performance ever, driven by the Urus which accounted for just over 60 percent of sold vehicles. And of course there’s Ferrari, which is poised to launch its first SUV in just a few weeks.

Rumors of a looming McLaren SUV were fanned in part by the automaker directly, back in December 2021. McLaren debuted a one-off electric SUV racer built for competition in the Extreme E championship. Earlier this year, we reported on another Autocar story claiming that McLaren was already working on an electric SUV, launching in the second half of the decade.

At the very least, we know McLaren’s new CEO is open to the idea of a super SUV. Whether it pans out that way, morphs into some kind of super crossover, or simply disappears completely, all remains to be seen.

Looking for more discussion on supercars and electric performance? Check out the Rambling About Cars podcast, available below.