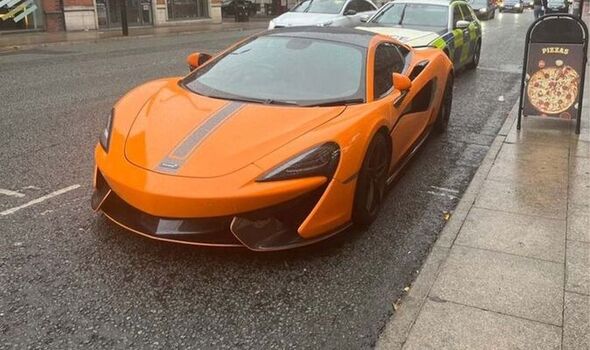 The driver of the supercar was hit with a £100 fine, while “flaunting” his vehicle in Manchester city centre. The orange McLaren was clocked by officers on Deansgate, Manchester, as it did not have a front number plate.

The move was welcomed by city centre champion and Manchester councillor, Pat Karney, Manchester Evening New reports. The councillor tweeted a response on social media: “Excellent work. We are overrun with these boy racers on Deansgate and Peter St.”

One member of the public responded to GMP Traffic by tweeting: “Many (most?) cars like these are hire cars, taken out for a day or two by folk for show-off photo sessions: IE ‘look how successful I am, even though I can hardly afford to hire this car, forget buying’.”

Another thought the driver had got off lightly, tweeting: “Straddling disabled ad loading bays too, by the look of it”. But GMP Traffic responded with “We’ll let him off for that”.

One person doubted whether GMP’s actions would make a difference, saying: “That won’t change the owner’s habit. A plate will fitted to pass the mot requirements and the fine will be paid and then the owner will carry on regardless of the regulation requirements”.

Another commented: “They should all have number plates on its the law they have plates on front for a reason and if you refuse to put a plate on the front of your car then you don’t deserve to have that car or a driving license.”

An irate member of the public told GMP “Get it towed”, and another “crush it that’ll teach them.”

While another echoed Councillor Karney’s viewpoint by posting: “I’m sick off there noise racing down Whitworth street early hour’s of the morning revving up.”

One joked he might be able to assist the driver with a number plate, posting: “Found one lying in the road if it helps BE11 END.”

The rules about displaying a number plate on the front of a car can be found on the Government’s website.